Experts find way to make better use of lunar samples 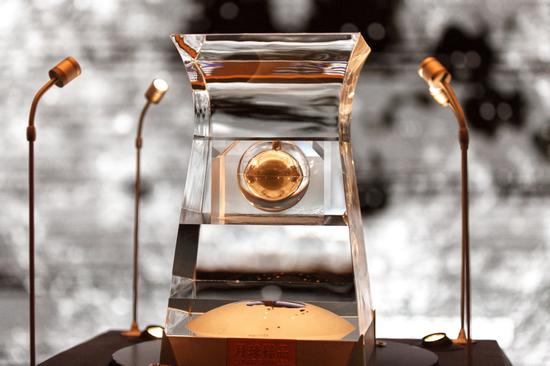 Lunar Sample 001 is seen at the National Museum of China in Beijing, on Feb 27, 2021. (Photo by Jiang Dong/chinadaily.com.cn)

Though China now has more than 1.7 kilograms of lunar soil gathered from its historic Chang'e 5 mission, the government practices a prudent policy when it comes to distributing these valuable samples to researchers.

Professor Wang Zaicong, a senior researcher at the School of Earth Sciences of the China University of Geosciences in Wuhan, Hubei province, said his team received 200 milligrams of Chang'e 5 lunar soil in July 2021, becoming one of the first recipients of the freshest materials that mankind has brought back from the moon in more than four decades.

"The samples are very precious and limited. We can only afford at most 50 milligrams that can be used during experiments and analyses. We must spare no effort to keep sample consumption as low as possible if we want to make good use of our samples," he said.

Wang explained that during an experiment or analysis, a certain amount of samples will be used, which means that their inner structure will be irreparably damaged.

Since the 1970s, scientists around the world have devised multiple techniques to analyze lunar samples, but all of the previous methods required a comparatively large amount of samples and would use a considerable proportion of them. Meanwhile, those approaches cannot allow for the simultaneous analysis of particle size and mineral modes because they are usually independently obtained with different instruments, and are difficult to correlate, said Wang.

Now, a group of researchers at China University of Geosciences headed by the professor has figured out a solution, which they call a novel method for the simultaneous analysis of particle size and mineralogy for lunar soil with minimum sample consumption. They have published their method in the latest edition of the scientific journal Science China－Earth Sciences.

With a Raman spectroscopy-based particle analysis system, the researchers managed to simultaneously determine the particle size properties and mineral constituents of the soil samples retrieved by the Chang'e 5 probe. The method uses only 30 micrograms, according to their paper.

"In addition to minimum sample consumption, this method requires very little sample preparation, and can rapidly build a large database with each particle precisely traceable. Therefore, this novel technique is particularly suitable for the analysis of future soil samples returned from extraterrestrial bodies," according to the scientific report.

One of the world's most notable space activities in 2020, the Chang'e 5 robotic mission was launched on Nov 24 that year at the Wenchang Space Launch Center in Hainan province and successfully landed on the moon on Dec 1. It was the world's third spacecraft to touch down on the lunar surface in the 21st century after its two Chinese predecessors－Chang'e 3 and 4.

The landmark mission returned 1,731 grams of lunar rock and soil back to Earth on Dec 17, 2020, achieving a historic accomplishment about 44 years after the last lunar substances were brought back from our nearest celestial neighbor.

The 23-day mission was one of China's most sophisticated and challenging space endeavors, and made the nation the third to retrieve materials from the moon, after the United States and the former Soviet Union.

The samples, weighing about 17.5 grams, were divided into 21 lots and handed over to scientists from 13 domestic research organizations working on 31 scientific projects.

Chang'e 5's orbiter is now flying around Lagrange Point 1, which is located between the Earth and the sun and is an ideal position for monitoring solar activities, for extended scientific operations.