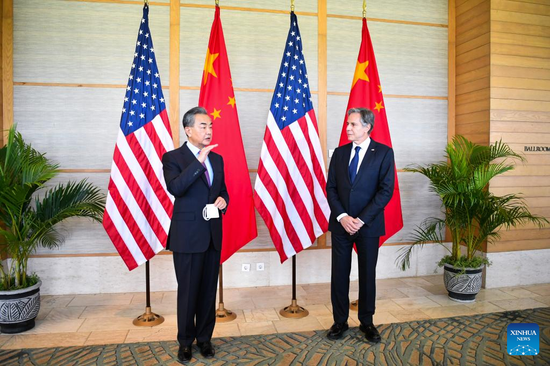 The two sides had a comprehensive, in-depth and candid conversation over China-U.S. relations, as well as international and regional issues of common concern for long hours.

Both sides agree that the dialogue was substantive and constructive, which is helpful for enhancing mutual understanding, reducing misunderstanding and miscalculation and paving the way for future high-level exchanges between the two countries.

At present, bilateral ties are still stuck in the predicament created by the previous U.S. administration and are even encountering more and more challenges, Wang said.

The historical narrative of China-U.S. relations has been distorted, the reality has been kidnapped by the so-called "political correctness," and the development direction is in danger of being further led astray, Wang said, noting that the fundamental reason is that there is a problem with the United States' perception of China, and its China policy based on such perception has naturally deviated from the right track.

Noting that there are some self-contradictions and inconsistencies between words and deeds in the U.S. policy towards China, Wang said those have reflected, on a deep level, the serious deviation in the U.S. perspectives of the world and China, in the China-U.S. history, interests and competition.

This has led many to believe that the United States is suffering from a growing "Chinaphobia," and if this "threat inflation" is left unchecked, the U.S. policy towards China will face a dead end, Wang said.

Wang said that the fundamental guidance for lifting China-U.S. relations out of the mire is to earnestly implement the consensus reached by the two heads of state.

The Chinese side has always followed the three principles of mutual respect, peaceful coexistence and win-win cooperation put forward by Chinese President Xi Jinping, Wang said, adding that the U.S. side should follow through on U.S. President Joe Biden's important commitments that the United States does not seek a new Cold War with China, it does not aim to change China's system, the revitalization of its alliances is not targeted at China; the United States does not support "Taiwan independence," and it has no intention to seek a conflict with China.

Wang stressed that since the U.S. side has pledged not to seek to change China's system, it should respect the path of socialism with Chinese characteristics chosen by the Chinese people and stop smearing and attacking China's political system as well as domestic and foreign policies.

Since the U.S. side has pledged not to seek a new Cold War, it should abandon the Cold War mentality and zero-sum game, and stop forming cliques, Wang said.

Since the U.S. side has pledged not to support "Taiwan independence," it should stop hollowing out and distorting the one-China policy, playing "salami-slicing" tactics on the Taiwan question, and using the "Taiwan card" to obstruct China's peaceful reunification, he said.

Since the U.S. side has pledged that it has no intention to seek a conflict with China, it should respect China's sovereignty and territorial integrity, stop interfering in China's internal affairs, and refrain from undermining China's legitimate interests under the pretext of human rights and democracy, Wang said, adding that the United States should also remove additional tariffs on China as soon as possible, and end unilateral sanctions against Chinese companies.

Noting that the United States has said that it seeks "guardrails" for bilateral relations, Wang said that the three China-U.S. joint communiques are the most reliable "protection" for the two countries.

Wang said that only by earnestly fulfilling the respective commitments in the three joint communiques, sticking to the right direction, removing roadblocks in a timely manner, and opening up the way forward will bilateral relations not derail and run out of control, adding that otherwise, no amount of "guardrails" will work.

Wang stressed that the two sides should follow the spirit of respecting each other, co-existing peacefully, avoiding confrontation and promoting win-win cooperation, and discuss and establish a guideline for the actions of both sides.

Besides, Wang said that China and the United States should establish channels to implement the consensus reached by the two heads of state and better coordinate exchanges in various fields and departments, adding that contradictions and differences should be properly managed in a bid to resolve outstanding problems.

Wang also comprehensively expounded China's solemn position on the Taiwan issue, demanding the U.S. side must be cautious in its words and deeds, must not send any wrong signals to the "Taiwan independence" forces, must not underestimate the firm determination of the Chinese people to safeguard territorial sovereignty, and must not make subversive mistakes that may ruin the peace across the Taiwan Strait.

He also refuted some wrong views of the United States on issues related to Xinjiang, Hong Kong and maritime affairs.

The United States is committed to managing risk factors in bilateral relations and is open to conducting cooperation with China, he said.

The two sides reached consensus on pushing for more results from the consultations of the China-U.S. joint working group on the basis of reciprocity and mutual benefit, agreed to create better conditions for diplomatic and consular personnel of the two sides to perform their duty, and restart consultations on cultural and people-to-people exchanges. Both sides also agreed to strengthen cooperation in such fields as climate change and public health, among others.

The Chinese side also put forward the vision of sound interaction between China and the United States in the Asia-Pacific region. The two sides also exchanged in-depth views on topics including the Ukraine issue and the situation on the Korean Peninsula.