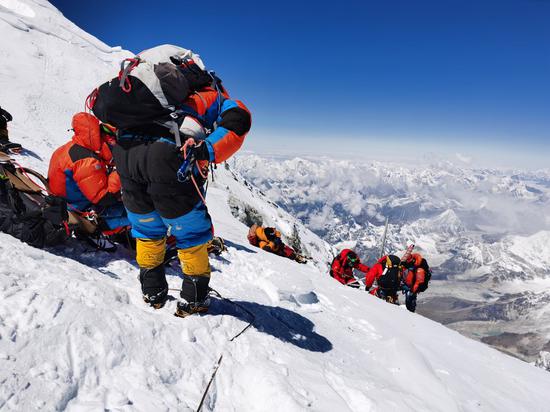 Chinese scientific researchers on Wednesday established an automatic meteorological monitoring station at an altitude of over 8,800 meters, making it the world's highest of its kind, on Mount Qomolangma on the China-Nepal border.

It has replaced the station sitting at an altitude of 8,430 meters on the south side of the mountain, set up by British and U.S. scientists in 2019, to become the world's highest, according to the Institute of Tibetan Plateau Research (ITP) under the Chinese Academy of Sciences (CAS).

Including the new weather station, eight elevation gradient meteorological stations have been set up on Mount Qomolangma -- one of the main tasks in China's new comprehensive scientific expedition on the world's highest peak at a height of 8,848.86 meters.

Zhao Huabiao, a researcher with the ITP, said the monitored meteorological data will support scientific research and mountaineering activities.

Also on Wednesday, 13 members of the expedition team reached the summit of Mount Qomolangma. At the summit, the squad measured the thickness of the ice and snow using high-accuracy radar for the first time, and collected samples for further research.

More than 270 scientific research members from five teams are participating in the expedition.

The glacier and pollutant research team led by Kang Shichang, a researcher with the Northwest Institute of Eco-Environment and Resources under CAS, will spend a month monitoring pollutants, the Rongbuk glacier and ice lake changes, as well as the greenhouse gas emissions from rivers and lakes covering the high-altitude area from the Mount Qomolangma base camp to the East Rongbuk glacier.

Kang said studying the changes to the glacier aims to clarify the impact of global warming, which is beneficial to mounting a global response to climate change.

"Through the study of glacier changes and glacier air pollutants, we can see the impact of global and regional human activities in the Qomolangma area," Kang said.

Zhu Tong, head of the College of Environmental Sciences and Engineering of Peking University, led his team to explore the impact of an ultra-high altitude environment on human health.

The team of 27 scientific researchers is monitoring the health condition of 50 volunteers positioned at varying altitudes: 5,200 meters, 5,800 meters, 6,350 meters and 8,848 meters.

"As you rise in altitude, your body will change accordingly, which makes this intuitive data valuable," said Zhu, 59, who is also an academician at CAS.

The team will collect blood, urine, saliva, feces and other samples, measure blood pressure, and monitor the pulse wave velocity of the volunteers, including Zhu himself, to provide samples for follow-up research.

With the most disciplines covered, the highest number of scientific research participants, and the most advanced equipment utilized, the expedition is the largest since surveys of the Qinghai-Tibet Plateau started in 2017.

"The ultra-high altitude comprehensive scientific expedition in the Qomolangma area is a feat of humanity," said Yao Tandong, an academician at CAS and team leader of the second scientific research survey of the Qinghai-Tibet Plateau.

Following the team's summit on Wednesday, scientists and researchers cheered and clapped inside the expedition's headquarters at the Mount Qomolangma base camp. Outside the camp, Tibetan snowcocks that often visit the camp crowed, reverberating across the valley.