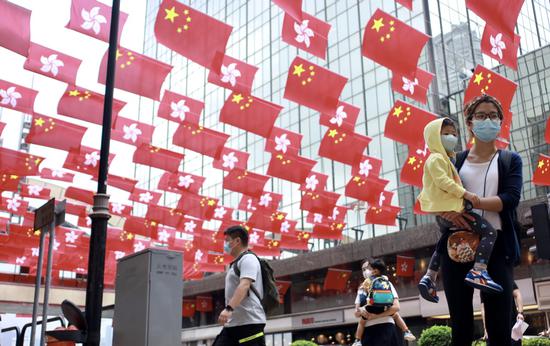 Central government and Hong Kong officials have joined hands to condemn the United States for imposing "meaningless sanctions" on seven deputy heads of the liaison office and for warning U.S. businesses about operating in the city.

In a statement issued on Saturday, the Liaison Office of the Central People's Government in the Hong Kong Special Administrative Region said the sanctions served no purpose other than to arouse the office's contempt for U.S. politicians, and fuel its will to fight for China's national interests.

The U.S. government issued a so-called "business advisory" for the city on Friday, warning U.S. firms of the "risks" of doing business in Hong Kong after the implementation of the National Security Law for Hong Kong last year. It imposed sanctions on seven deputy directors of the liaison office, claiming they had "systematically undermined" Hong Kong's democracy.

Shrugging off the latest threat, the office said it will continue to perform its duty in safeguarding national security and promoting the successful implementation of "one country, two systems".

A spokesperson for the Hong Kong and Macao Affairs Office of the State Council said on Saturday the U.S. tactic was "despicable". It demonstrates Washington's hypocrisy and shows the U.S. is a "paper tiger" that is "at its wit's end" for making such a move, the spokesperson said.

The U.S. moves will only expedite a doomsday for their "proxy in the city", the spokesperson added.

A Foreign Ministry spokesperson on Saturday said the recent U.S. moves ignored the business community's wishes and were an attempt to cast a pall over Hong Kong's prospects and intimidate foreign investors. The strategy has again exposed the U.S.' sinister intentions to destabilize the HKSAR and thwart China's development, the spokesperson added.

In recent years, China has been resolutely fighting U.S. sanctions with strong countermeasures. If Washington refuses to stop, China will "fight to the end", the spokesperson said.

Hong Kong Chief Executive Carrie Lam Cheng Yuet-ngor said in a Saturday statement that she is "alarmed" by the "sweeping and totally unsubstantiated" remarks by the U.S..

Lam said the National Security Law for Hong Kong respects and protects human rights and individual freedoms. She added the great majority of Hong Kong people are patriotic and fully embrace the principle of "one country, two systems". After the security law's implementation, Hong Kong remains an open and free economy, underpinned by the rule of law and a robust regulatory regime.

At a recent session of the United Nations Human Rights Council, over 90 countries expressed their support for China's efforts to restore stability in the HKSAR, she said.

Lam urged U.S. authorities to view Hong Kong matters in an "honest and fair manner", instead of "intimidating" U.S. businesses and individuals with the "business advisory".

The American Chamber of Commerce in Hong Kong said on Friday that Hong Kong remains a critical and vibrant facilitator of trade and financial flows between the East and West.

The business organization has operated in Hong Kong for over 50 years and has 1,400 members.

Hong Kong's largest political party－the Democratic Alliance for the Betterment and Progress of Hong Kong－said the liaison office officials are dedicated to serving the Hong Kong community in accordance with the laws of the city and have won wide support from people.

The sanctions will not shake their determination to serve the city and the nation, but will only motivate the Hong Kong public to oppose U.S. bullying more firmly.