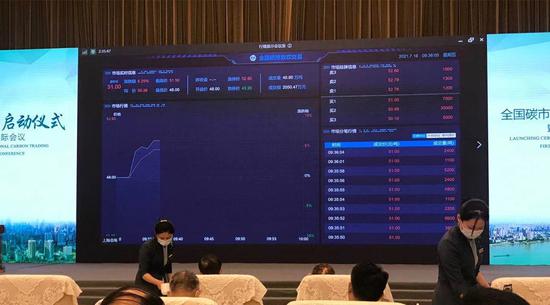 The inauguration of China's national carbon market - the largest in the world - will not only help accelerate domestic carbon reduction process but also promote global response to climate change, international experts have said.

The first transaction occurred at 9:32 am shortly after the market opened for business on Friday, as China Daily reporter witnessed in the Hubei provincial capital of Wuhan, where a launching ceremony was held.

The China Hubei Emission Exchange in Wuhan is designated to deal with applications and collect data for the market.

The market now involves over 2,000 companies in the power generation sector, and it will be extended and include another seven major carbon-emitting industries, such as steel, chemicals and paper-making.

Covering over 4 billion metric tons of carbon dioxide a year at present, the market has already replaced the European Union's carbon trading program to be the world's largest.

Carbon trading is the process of buying and selling permits to emit carbon dioxide or other greenhouse gases. Designated emitters will be given the right to release a certain amount of greenhouse gas. At the end of each cycle, emitters will have to buy unused permits from the market if they emit more than the amount they are given.

Fred Krupp, president of Environmental Defense Fund, said China's national carbon market will be one of the central policy instruments to achieve its goals of peaking carbon dioxide emissions before 2030 and reaching carbon neutrality before 2060.

With the first transactions taking place in the system, China has reached an important milestone in its progress on climate action, he said.

"A well-functioning carbon market will contribute to a lower peak and a more rapid reduction in emissions afterward," he added.

Krupp said the market is also a sign of China's full commitment to participating in global climate governance.

Depoux pointed out that the price discovery function can exert pressure on the transformation of high-energy-consuming industries, while providing a clearer ROI (return of investment) expectation for the development of low-carbon technologies.

In the later phase of the 14th Five-Year Plan (2021-25) period, the other seven major carbon-emitting industries are expected to be gradually included in market, "making the carbon emission trading mechanism a key policy tool to realize carbon emission reduction targets," said Thomas Luedi, senior partner at Bain & Co in Shanghai.

As more renewable energy sources are used for power generation, Bain expected the proportion of China's non-fossil energy generation will increase to about 45 percent by 2030. The number was around 30 percent last year, according to the National Energy Administration.