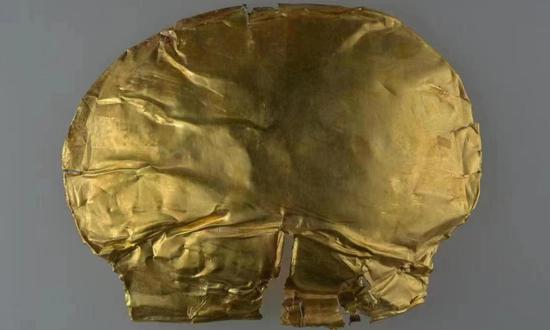 A gold "funeral mask" dating back to more than 3,000 years ago was excavated from the tomb of an ancient noble in Zhengzhou, capital of Central China's Henan Province, officials with China's National Cultural Heritage Administration announced at a recent press conference.

Different from gold masks discovered at sites from the ancient Shu civilization in Southwest China's Sichuan Province, the mask representing the culture of China's Central Plains was  large enough to cover a person's entire face. This mask and other relics found in the Shang Dynasty (c.1600BC-1046BC) tomb have shed light on the burial rituals and gold culture of the Shang people.

The ancient city ruins and three other archeological discoveries revealed at the press conference number among the latest achievements of excavation and research into early city sites along the middle reaches of the Yellow River. All these sites date back to the early stages of Chinese civilization, according to a press release from the administration on Friday.

The remains of the tomb of the Shang Dynasty noble, around 10,000 square meters in size, possessed some of the highest quality and most diverse array of burial objects among all the tombs found in the city ruins.

Among all the discoveries from the tomb, which include bronze and jade wares, the gold mask is the most striking finding. The mask is 18.3 centimeters in length, 14.5 centimeters wide and weighs around 40 grams.

Huang Fucheng, a researcher at the Zhengzhou Municipal Institute of Cultural Heritage and Archaeology, said that the size of the mask means it can basically cover the entire face of an adult.

Previously, a large number of gold items were unearthed at the famed Sanxingdui Ruins site in Sichuan Province, but gold wares are rarely found at Shang Dynasty cultural sites in the central plains, an area centered in much of today's Henan Province and parts of the neighboring provinces of Shanxi, Shandong and Hebei. Researchers say that these rare discoveries can help expand archeological research into Shang Dynasty culture.

Chen Lüsheng, a renowned museologist and researcher at the National Museum of China, told the Global Times that the tomb is a significant find for research into the burial rituals and systems of the Shang Dynasty, and because it dates back to a very early period during the dynasty, it can provide new insight into the origins of Chinese civilization.

Chinese civilization and its origins, especially the study of the Xia Dynasty (c.2070BC-c.1600BC), has been one of the most important topics in Chinese archaeology.

Since 2018, the National Cultural Heritage Administration has been carrying out 11 archeological projects focusing on tracing and researching the origin of Chinese civilization. So far, more than 200 excavations have seen significant achievements.

The projects focusing on regions along the Yellow River, commonly seen as the birthplace of Chinese civilization, are seen as the highlights of these related archeological projects.

Besides the Shang Dynasty city ruins in Zhengzhou, archaeologists also excavated the Erlitou Ruins in Yanshi, Henan Province. Dating back to about 3,500 to 3,600 years ago, they are the largest late Xia Dynasty site discovered to date.

Some 3 million square meters in size, the surviving ruins have revealed the remains of two palaces, a residential area, pottery and bronze workshops, as well as kilns and tombs.

The latest archaeological highlights at the site include the discovery of rammed earth walls on both sides of the roads in many parts of the city and walls dividing several areas outside the palace and workshop areas, showing that people from different classes lived in different parts of the city.

Recent excavations have also unearthed for the first time at the site the remains of pottery, more than 800 pieces of pottery decorated with red paint.

The Bicun Ruins, dating back to 3,700 years to 4,000 years ago, are located in North China's Shanxi Province. New discoveries at the site, including a complex of architectures built of stones that have some characteristics of watchhouse, demonstrate that the site might be an important customs pass at that time.

Another ruins site in North China's Inner Mongolia Autonomous region covers the area of around 1.38 million square meters and has been basically confirmed that it had triple defense systems, including inner city, outer city and barbican. Researchers found two underground passages in the outer barbican of the ancient city.

The excavation works in the inner city area found a large number of remains, such as tombs, housing sites and ash pits, which provide clues for understanding the structure layout of the inner city.