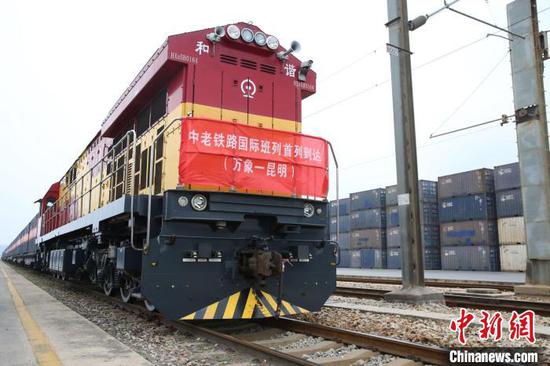 (ECNS) -- A total of 116 trains serving the China-Laos Railway cleared Kunming Customs in Yunnan Province as of Monday, with 49,800 tons of import and export goods valued at 667 million yuan (about $105 million) transported.

Over 100 kinds of goods have been transported since the opening of the railway in last December, including natural rubber, iron ore, vegetables, daily necessities, etc., according to Kunming Customs.

Up to now, commodities from 11 cities in Hebei, Shandong, Zhejiang, Guangdong, Jiangsu, Sichuan provinces and Chongqing Municipality have been exported to Laos via China-Laos freight trains, with some sold on to other Southeast Asian countries like Singapore, Thailand and Myanmar.

The China-Laos Railway will further boost the economic and trade operation between China and Laos and among countries along the "Belt and Road Initiative" (BRI).