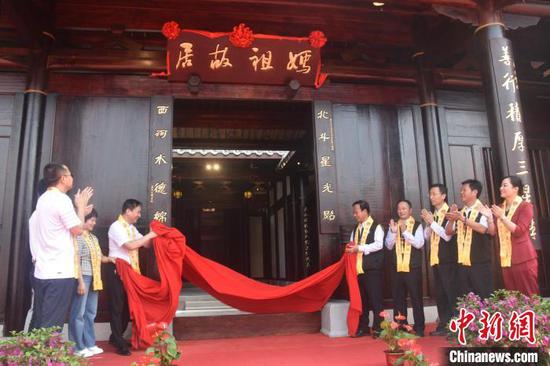 An inauguration ceremony is held for the reconstructed residence of Chinese sea goddess Mazu in Meizhou Island of Putian City, Fujian Province, May 10, 2021. (Photo/China News Service)

An inauguration ceremony was held in the birthplace of Mazu, the deified form of a devoted woman named Lin Mo, who lived in the 10th century and died attempting to rescue shipwreck victims at the age of 27.

The 669-square-meter reconstructed residence features a brick, timber and stone structure with Tang-style wooden components. It has five rooms and three courtyards, restoring scenes of Mazu's life before she became a god.

Meizhou Island is the hometown of Mazu, so the reconstruction will be a significant platform to explore the historical and humanistic connotations and make full use of local culture, Chen said.

In 2010, the board of directors of Meizhou Mazu Temple began restoring Tianfei Hometown Ruins Park after initially finishing basic construction of the temple, and tentatively completed the construction of Ping'an Pagoda, the Mazu Cultural Origins Museum, the Grand Archway, Pangui Pavilion and other buildings.

In 2018, the board decided to prioritize the second-phase construction of Tianfei Hometown Ruins Park, and invited historians and experts on cultural relics, architecture and folk customs to investigate, research, demonstrate and design. 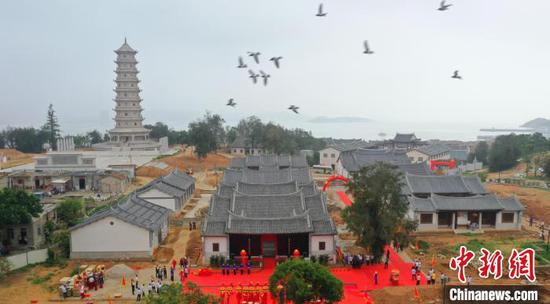 An inauguration ceremony is held for the reconstructed residence of Chinese sea goddess Mazu in Meizhou Island of Putian City, Fujian Province, May 10, 2021. (Photo/China News Service)