5 killed in blast at chemical plant in NE China's Liaoning 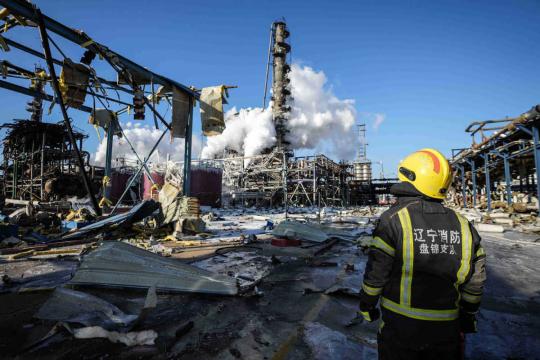 Firefighters carry out search and rescue work at the scene of the explosion in Panjin city, Liaoning province, on Monday. (PAN YULONG/XINHUA)

Five people were killed in a fire and explosion at a chemical plant in Panjin city, Liaoning province, on Sunday, China Central Television reported on Monday.

Dozens more were injured and eight were reported missing after the blast in Panshan county, which is administered by Panjin.

The accident occurred while maintenance was being conducted at Panjin Haoye Chemical at around 1:25 pm on Sunday.

A total of 370 people were involved in the rescue effort, including firefighters, emergency responders and environmental protection workers.

The fire has been brought under control, and other facilities near the site have been secured. Air monitoring around the plant showed no abnormalities, according to the Panshan county government.

All the injured have been hospitalized, the government said.

The cause of the accident is under investigation, and the Ministry of Emergency Management has dispatched a work team.

On Sunday, Hao Peng, Party secretary of Liaoning, and Li Lecheng, the provincial governor, stressed all-out efforts were being made to safeguard people's health and lives, prevent secondary disasters and comfort the families of the victims.

Speaking via video at the provincial fire and rescue center, Hao also required cities across the province to learn lessons from the accident and eliminate potential risks.