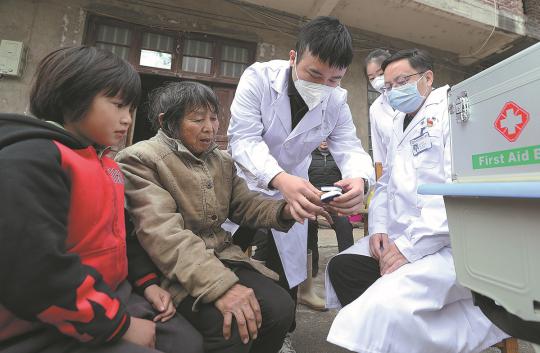 Local governments must make sure medications and antigen test kits are readily available in rural areas, according to a guideline released on Wednesday.

Issued by the State Council's Joint Prevention and Control Mechanism, the country's COVID-19 control task force, the guideline said antigen test kits or nucleic acid tests must be made readily available for fever patients. Village health clinics must ensure they have at least a two-week supply of medication, to which vulnerable groups or those with financial difficulties should have priority access.

Local authorities are also tasked with conducting regular inspections, delivering medication, transporting patients to bigger hospitals and raising awareness about epidemic control, it said. Efforts must also be made to guide villagers to get vaccinated, wear masks and avoid gatherings and spending time with elderly relatives with underlying illnesses.

Media reports of indiscriminate use of antibiotics and hormonal drugs in treating fever patients in the countryside have underscored the importance and timeliness of the official guidance from health authorities.

They warned that the expected mass migration for Spring Festival this month would create a new challenge for epidemic control in such areas, where a large number of elderly people live.

The officials also asked for more support for the rural healthcare system in terms of medication, equipment, human resources and funds, and to improve the system's capacity to address challenges brought by the epidemic.

The spread of COVID-19 in the countryside has cast a spotlight on the use of antibiotics and hormonal treatments by rural medics to treat fever patients.

On Dec 30, WeChat account Fancaiju published an article praising the long-standing practice conducted by "barefoot doctors", or farmers with minimal basic medical and paramedical training, to treat fever patients. The article, among others shared on social media, made dangerous claims that COVID-19 patients could be treated with antibiotics and other medications that could bring about harmful and even fatal side effects.

Epidemiologists have said that antibiotics, which can trigger fatal allergies, are ineffective in treating COVID-19 or other infections induced by viruses, and should only be given to COVID-19 patients if there's clear evidence of bacterial-induced complications.

Long-term use could also lead to antibiotic resistance. More than 1.2 million people died worldwide from antibiotic-resistant infections in 2019, according to a peer-reviewed research article published in The Lancet last year. That figure exceeded that of major potentially fatal illnesses such as HIV/AIDS and malaria.

Though hormonal drugs have been used to treat COVID-19 patients in clinical settings, the usage has generally been for those in critical condition. Side effects include elevated blood sugar, porous bones and gastrointestinal ulcers.

Earlier this month, gmw.cn, a news website run by mainstream newspaper Guangming Daily, published a commentary criticizing the WeChat article as being misleading and out of touch with the realities in the countryside.

The newspaper said the use of drugs including antibiotics to treat fever with unknown causes was in fact a last-ditch option in case of temporary shortages of medicines and overcrowded hospitals. Such treatments had never been included in China's general treatment plans for COVID-19 patients.

The issue has raised alarm among health officials, too.

On Dec 13, authorities in Huangshi, Hubei province, issued an order to discipline medics who used such drugs in rural areas to treat COVID-19 patients. The document cautioned against the use of antibiotics, hormonal drugs and vitamins, and asked rural medics not to prescribe intravenous drips unnecessarily.

A report released by the National Adverse Drug Reaction Monitoring Information Network in 2020 said the random use of antibiotics was the leading cause of adverse drug reactions, without specifying the percentage. Some 30 percent of such reactions were detected among adults age 65 and older.