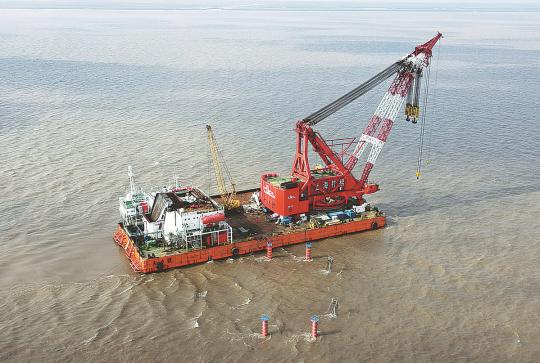 A photo shows workboat Dali working at the excavation site at the mouth of the Yangtze River. (Photo/China Daily)

A shipwreck that has been underwater for more than 150 years was successfully lifted from the riverbed early Monday morning in Shanghai.

The merchant ship, dubbed as No 2 on the Yangtze River Mouth, dates back to the reign of Emperor Tongzhi (1862-1875) in the Qing Dynasty (1644-1911). It sat 5.5 meters below the ocean bed at a shoal on the northeast tip of Hengsha Island in Chongming district.

As one of the most important underwater archaeological excavation projects in China, the boat was scooped from the riverbed by 22 giant arched steel beams, which formed a caisson 48 meters long, 19 meters wide, 9 meters tall and weighed 8,800 tons.

The unprecedented technology was specially developed for the project to achieve the best possible protection of the cultural relics. After a slow lifting process that lasted for almost four hours on Sunday night, the shipwreck gradually emerged in the early hours of Monday morning through the moon pool in the middle of the workboat named Fenli.

In the coming days, Fenli will take the shipwreck to Dock No 1 in the former site of Shanghai Shipyard in Yangpu district where the shipwreck will be carefully examined and studied, opening a new chapter in China's history on the protection of cultural relics and archaeological discoveries.

Archaeologists found that the boat is about 38.1 meters long and 9.9 meters wide at its broadest point. A total of 31 cargo chambers were detected, with its main structure quite complete, including the prow, bollard, port side and starboard.

Trial clean-up in four selected chambers found piles of ceramic objects made in Jingdezhen, Jiangxi province. A large number and wide variety of cultural relics excavated are either complete or can be restored. Also found on the boat or scattered near it were purple clay objects, hookah pots made in Vietnam, pulley, cables and construction materials as well.

Director of Shanghai Museum Chu Xiaobo said in the CCTV live stream that the shipwreck contains so much historical information that it is equal to the long scroll painting "Along the River" during the Qingming Festival, one of the best known paintings from the 11-12th century in China depicting the daily life and landscapes of the capital city at that time.