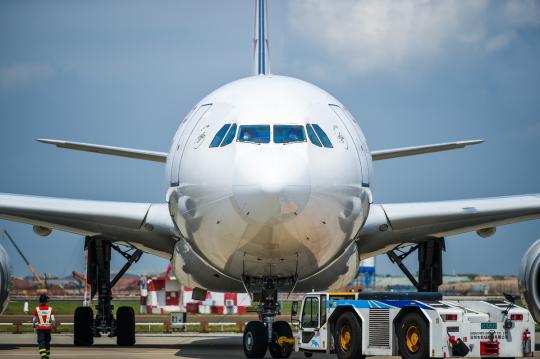 A widebody A330-200 aircraft of China Eastern is set to take off from Shenzhen Baoan International Airport in Shenzhen, Guangdong province, for Los Angeles in May 2020. (LIU YI/FOR CHINA DAILY)

European aircraft manufacturer Airbus said that after the Regional Comprehensive Economic Partnership agreement came into effect, the pact is expected to continuously drive the growth of international trade and fuel the demand for more freighters in the region.

Over the next two decades, global trade value is expected to double from current levels, and the Asia-Pacific region is foreseen to become the largest regional market for international trade, replacing Europe, according to global consultancy IHS Markit.

By 2041, about 630 new freighters are expected to be delivered to China, including 340 small freighters, 200 medium-sized freighters and 90 large freighters. Currently, China has some 200 freighters in operation, accounting for 10 percent of the total globally, Airbus said.

By 2025, Airbus plans to deliver its first new-generation A350 freighter. With a flying range of up to 8,700 kilometers, the A350F can transport live animals like racehorses, perishable products like flowers, temperature-controlled goods such as vaccines and large-scale and heavy goods.

Airbus has received multiple orders, most recently from Etihad Airways in the United Arab Emirates, and is in discussions with a number of domestic and international carriers and logistics firms about its latest freighter model.

"Fueled by the RCEP, the economic and trade growth rate in the Asia-Pacific region is predicted to significantly exceed that of other regions in the world," said Zhang Hanguang, senior analyst of airline marketing at Airbus China.

"China will undoubtedly become one of the most important markets driving the growth of the Asia-Pacific region. We are committed to growing our presence of freighters in China and tapping its huge market potential," Zhang said.

The RCEP agreement, which took effect on Jan 1, covers 15 Asia-Pacific countries. The pact is expected to eliminate up to 90 percent of tariffs on goods traded among its members over the next 20 years. In the first eight months, trade between China and other RCEP members grew 7.5 percent year-on-year, said the General Administration of Customs.

The COVID-19 pandemic has had a significant negative impact on the global aviation industry, and the air cargo transportation market became a bright spot for the sector.

Before the pandemic, goods were mainly transported by bellyhold freight operations, especially in the domestic markets. Since the pandemic, due to the suspension of a large number of commercial flights, goods transportation by freighters began to pick up, and it accounted for more than half of total business. The share has been higher in the international market, said the China Academy of Civil Aviation Science and Technology.

"China's air cargo throughput ranks among the top globally. State-owned carriers have been extending their logistics services, and express delivery firms such as SF Express and JD Logistics have been making more investments in building their airfreight capabilities," said Zhong Shan, an economist at the academy.

In addition, China has shown a strong demand for freighters converted from passenger aircraft, such as the A330 and the A320. Airbus said it has more than 230 A330 and some 1,100 A320 and A321 passenger aircraft operating in China. Those aircraft that aged 15 years or older on average will gradually become renovated freighters.

"China's fleet of passenger aircraft has been relatively young. In the next 20 years, there will be an abundant source of aircraft available for renovation. The cost of renovation and technical skills in China has been attractive, and Airbus has developed a relatively sound industrial chain in the country," Zhang of Airbus said.

Meanwhile, US aircraft manufacturer Boeing recently predicted that with the rapidly growing e-commerce business in China, through 2041, the fleet size of air freighters in the country is expected to quadruple to more than 800 cargo planes to satisfy the demand.