More investment made in roads to stabilize economy 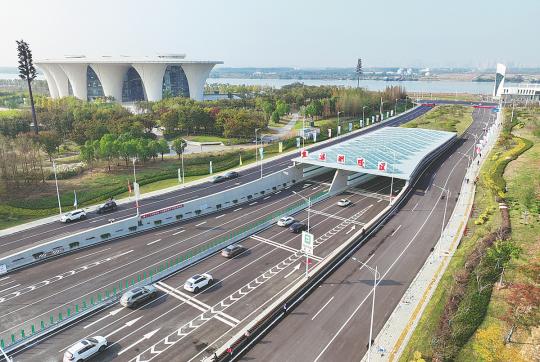 The Yuliangzhou Tunnel in Xiangyang, Hubei province, opens to traffic on Monday. It is the first highway tunnel under the Hanshui River, a major tributary of the Yangtze River. (Photo by XIE YONG/FOR CHINA DAILY)

China has increased the construction of highway infrastructure in order to maintain and increase investment and stabilize the economy, according to the Ministry of Transport.

From January to September, construction began on 299 new expressway and national and provincial highway projects with a total length of 9,645 kilometers and 882 billion yuan ($121 billion) in investment, Gu Zhifeng, deputy chief of the highway bureau of the Ministry of Transport, said at a news conference on Monday.

Among the projects, 34 of them stretching 2,132 km were started in September, and account for 43.7 percent of the total road infrastructure investment in the first three quarters of the year.

The projects include an underwater tunnel in Jiangsu province, as well as expressways in Sichuan and Yunnan provinces.

China built 9,756 km of expressways, and national and provincial highways from January to September, with a total investment of 557 billion yuan.

"The ministry will continue to expand investment in road construction, with the key to improving the connectivity of the road network," Gu said.

He noted the implementation of major highway projects will facilitate economic stability, boost the construction of the modern transport system and support high-quality development.

"Transportation is the pulse of the economy and the nexus of civilization," said Hou Zhenxing, deputy director of the ministry's general planning department. He noted that the sector has created domestic demand and expanded investment.