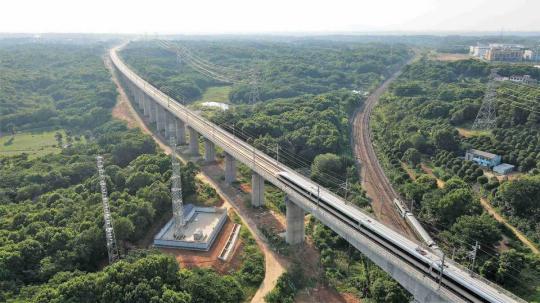 A high-speed test train is seen running on the Changsha-Yiyang section of the Chongqing-Xiamen High-speed Railway in July. (Provided to China Daily)

China's transport sector has recently mapped out a detailed plan to build the backbone network of the country's comprehensive transportation system, with the expected scale to reach 260,000 km by 2025.

According to a guideline released by the Ministry of Transport, the National Railway Administration, the Civil Aviation Administration of China and the State Post Bureau, the scale of the backbone network will improve operational efficiency and service quality.

The backbone network includes the most important passages and corridors linking major areas of the country.

It has reduced travel time among regions, cities and provinces to strongly support social and economic development.

The backbone network is an important part of the nation's comprehensive transportation network, according to a high-profile blueprint guiding China's transport development to 2035.

The blueprint, which was released by the State Council last year, is China's first mid-to-long-term comprehensive transport plan and maps out the country's transport prospects to 2035, according to Transport Minister Li Xiaopeng.

It has set the goal of building a more convenient and high-quality transport network, which will allow most residents to have access to a national highway within 15 minutes, an expressway in half an hour and a railway in an hour.

"The network, which will connect all county-level administrative regions, borders, major facilities and tourism spots, will be comprised of roads, railways, air routes and waterways," Li told a news conference last year.

According to the blueprint, the network will be convenient, cost-effective, green, intelligent and safe.