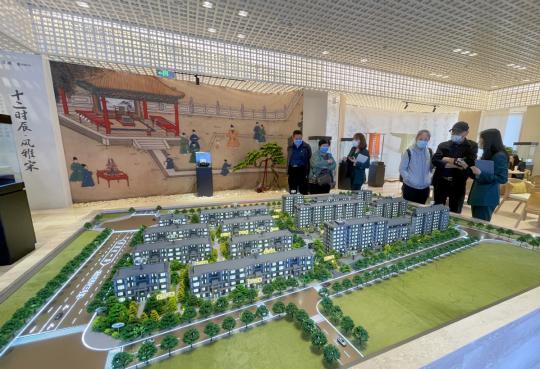 A salesperson (right) introduces a residential project to prospective homebuyers at a real estate agency during the National Day holiday, on Oct 5, in Beijing. (Photo/CHINA NEWS SERVICE)

Both international asset managers and property developers have accelerated the expansion of their presence in the Chinese real estate market, driven by the perception that it presents undeniable investment value.

The first 100 rental apartments of the project were made available to the market in September and the rest are scheduled to be open by mid-2023.

Stuart Mercier, head of Asia real estate at Brookfield, said China's rental housing market is expected to expand rapidly in the next few years, given the supportive policies and rising market demand. Shanghai now has 10 million non-local people who work and live in the city. This is a major driver of rental housing, he said.

Brookfield has already set up a midrange to high-end brand "Blinq" as part of its efforts to increase rental housing investment in China, with the Yangpu complex being its first project under this brand, Mercier said.

In late May, Morgan Stanley Real Estate Investing announced on its official WeChat account the acquisition of four logistics and industrial assets from Singapore-headquartered SC Capital. The acquisition included 210,000 sq m in all in Nantong, Taicang and Suzhou in Jiangsu province and Jiaxing in Zhejiang province, which are positioned as regional distribution centers, given their access to major transport networks across the Yangtze River Delta region and their proximity to Shanghai, MSREI experts said.

This acquisition is of great value given the shortage of quality logistics assets in transportation hubs in China, said Toru Bando, MSREI's chief investment officer.

MSREI tapped into the logistics property sector in China in 2015, managing over 1 million sq m of projects up to this date. It has been closely watching the sectors receiving increasing attention from investors, including industrial parks for biomedical companies and long-term rented flats in China, he said.

The local unit of CapitaLand, the Singaporean property developer that entered the China market in 1994, has also made quite a few acquisitions in the commercial real estate sector.

It successfully bid for Borui Tower, which is located near Beijing's East Third Ring Road, for 2.04 billion yuan on Oct 17.

Earlier in March, CapitaLand purchased a plot of land for residential development in Chengdu, Sichuan province for 1.18 billion yuan, and another piece of land in Wuhan in Hubei province for 2.31 billion yuan.

In April, the property developer spent 3.66 billion yuan to acquire a data center park in Shanghai.

And in October, CapitaLand China Trust made a foray into China's logistics market by acquiring 1.68 billion yuan worth of four logistics assets in China.

"Logistics projects are generally favored by investors for their promising prospects, so we have seen many transactions reached by both foreign and domestic investors," said Yang Yuechen, Knight Frank's head of research and consultancy in Shanghai and Beijing.

"However, with the implementation of REITs (real estate investment trusts), the rationalization of property asset prices, and the relaxation of central monetary and credit policies, we expect the investment market will see more promising growth in the fourth quarter," Sun said.