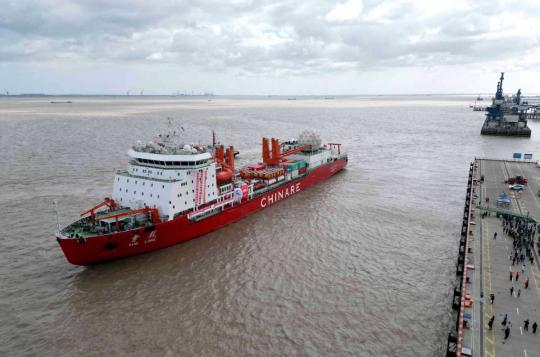 Research icebreaker Xuelong, or Snow Dragon, departs from its home base in Shanghai for the country's 39th Antarctic expedition on Monday. (CHINA DAILY)

China's research icebreaker Xuelong, or Snow Dragon, departed from its home base in Shanghai for its latest Antarctic expedition on Monday morning, marking the third time that both Xuelongand Xuelong 2will take part in a joint expedition in the southernmost continent.

The nation's first domestically built research icebreaker Xuelong 2, or Snow Dragon 2, departed on Wednesday from Shanghai to embark on its 39th Antarctic expedition.

The two Xuelongicebreakers will conduct scientific research on the impact of global climate change in the key ocean area, with the venture including research on the polar region's air composition, its water environment, deposits and ecosystem.

The 39th Antarctic expedition will also encompass monitoring the ice and snow environment and astronomical observation along the areas of China's Zhongshan, Taishan and Kunlun stations.

Exploration of subglacial topography in the areas including Princess Elizabeth Land will also be conducted.

The replenishing of supplies and staff rotation at China's Zhongshan Station and Great Wall Station will also be completed during the expedition.

The joint expedition, first held during China's 36th Antarctic expedition in 2019 and 2020, offers more options in the composition of personnel, route planning and task allocation, which will help expand the continuity and coverage of polar scientific research. It will also improve the efficiency of the research.

A total of 255 researchers and support staff will participate in this polar expedition, which will take about 180 days, according to the Ministry of Natural Resources. All of the researchers are expected to return in April.