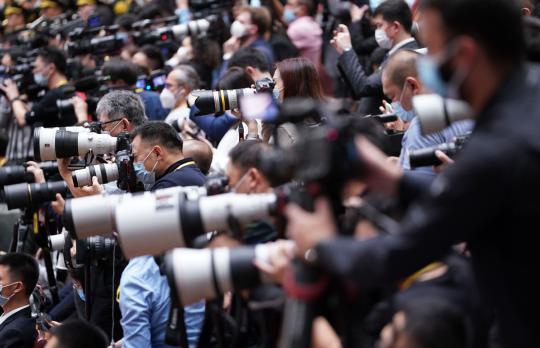 Journalists work at the opening session of the 20th National Congress of the Communist Party of China in the Great Hall of the People in Beijing, Oct 16, 2022. (Photo/Xinhua)

Journalists from around the world are closely following the 20th National Congress of the Communist Party of China to better understand the country's achievements, past and future challenges as well as efforts in epidemic control and anti-corruption.

Otieno Bryan, a reporter from the Kenyan newspaper The Star, said he carefully read the report that Xi Jinping delivered at the opening session of the congress to "deeply understand what makes people support the government and why people in the country love what the government does for them".

"I think the government has worked well in making its people happy. Happiness means productivity," he said. "That's why China's economy grows fast, even facing the pandemic."

Like many other journalists from abroad, Bryan recently made his first trip to China specifically to cover the event.

About 750 foreign journalists are attending the congress, accounting for roughly a third of all the media professionals reporting from the front lines at relevant venues.

Ojeda Istvan, who writes for the Cuban weekly magazine Periodico 26, was excited after attending a news conference about China's anti-corruption work on Monday.

Istvan said it is important for his homeland to learn from how the CPC has cracked down on corruption.

"Fighting against corruption is among the most important issues for the Communist Party of Cuba," he said. "Cuba and China have a similar political system. We want to learn from China."

Leonardo was busy writing a story after a news conference about the economy on Monday and said he was especially impressed by the report Xi delivered at the opening session of the congress. He noted the report's emphasis on people's participation in the political process and the frequency of the word "security".

He said he had read some negative stories about China before visiting but discovered a totally different place upon arrival.

"I want to provide the audience with an objective view of what's actually going on here through my short trip," Leonardo said.

Supa Chai, a reporter with Thailand's Manager Media Group, said he is interested in China's epidemic control efforts. "We really hope Chinese tourists will come back to Thailand," he said, adding that China was the No 1 source of inbound visitors to his country before the pandemic.