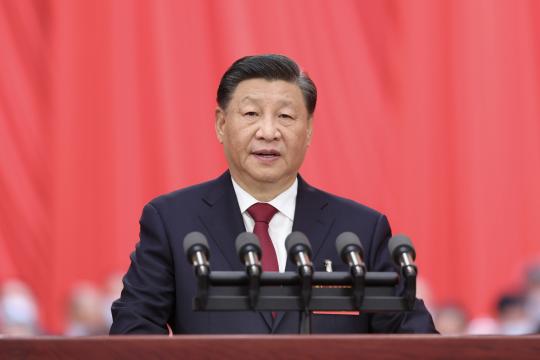 Xi Jinping delivers a report to the 20th National Congress of the Communist Party of China on behalf of the 19th CPC Central Committee at the Great Hall of the People in Beijing on Oct 16, 2022. [Photo/Xinhua]

At a crucial moment in which China is embarking on a new journey to build a modern socialist country in all respects, the Communist Party of China has mapped out an ambitious blueprint to comprehensively advance Chinese modernization, a central task it has laid out for the next five years and beyond to realize national rejuvenation.

When delivering a report on behalf of the 19th CPC Central Committee at the opening session of the 20th CPC National Congress on Sunday, Xi Jinping expounded on what the Chinese path to modernization looks like and how it works, and said that it offers humanity a "new choice" for achieving modernization.

Highlighting that Chinese modernization is socialist modernization pursued under the leadership of the Party, Xi said that it contains elements that are common to the modernization processes of all countries, but "it is more characterized by features that are unique to the Chinese context".

Since the founding of the People's Republic of China in 1949, generations of Chinese people have sought to realize the country's modernization.

After China completed the historic task of building a moderately prosperous society in all respects in 2021, Xi ushered in a new stage for the Chinese nation to become modernized on all fronts in the next few decades.

He explained in the report to the 20th CPC National Congress that China's modernization will be shared by a large population, and features the common prosperity of all its people, material abundance and cultural-ethical enrichment, harmony between humanity and nature, and peaceful development.

In a two-step strategic plan, China aims to basically realize socialist modernization by 2035, and then build a great modern socialist country that is prosperous, strong, democratic, culturally advanced, harmonious and beautiful by the middle of this century.

A series of steps have been set out in the report, including significantly increasing economic strength, scientific and technological capabilities, and composite national strength; basically modernizing the system and capacity for governance; improving the system for whole-process people's democracy; and substantially growing the middle-income group.

Alessandro Golombiewski Teixeira, a professor of public policy at Tsinghua University's School of Public Policy and Management, said that common prosperity has become one of the most important concepts guiding Chinese policymakers in recent years.

"This is a bold commitment for all Chinese, and common prosperity will become an important feature of China's socialist modernization," Teixeira said in an article published on the website of China Global Television Network.

"China's practice of pursuing common prosperity is of great global significance. If it succeeds, it will provide the world, especially the vast number of developing countries, with a choice of their own development path."

Externally, China's modernization faces a more volatile international landscape that is speedily evolving. Factors such as the COVID-19 pandemic, the Ukraine crisis, the increasing geopolitical competition and mounting protectionism and unilateralism have complicated China's development environment.