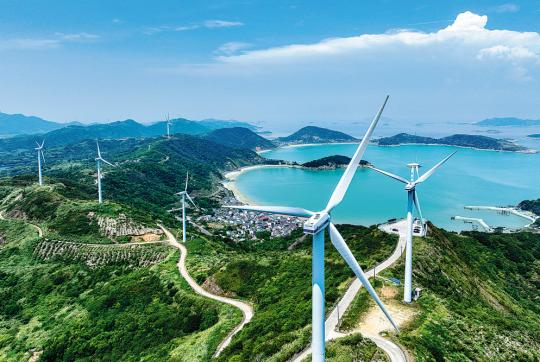 China will continue stepping up domestic energy supplies and reserve capacity, with the ambition of having annual comprehensive energy production capacity exceed 4.6 billion metric tons of standard coal equivalent by 2025, an official said on Monday.

Ensuring energy security is always the primary task of energy work in China, a major global energy producer and consumer, Ren Jingdong, deputy director of the National Energy Administration, said on the sidelines of the ongoing 20th National Congress of the Communist Party of China.

The government will further enhance a diversified domestic supply base with coal serving as both "the cornerstone" and also playing a supportive role in maintaining energy security while speeding up development of domestic oil and gas resources, Ren said.

China will also further improve its coal and petroleum reserve system while stepping up the construction of liquefied natural gas terminals and other facilities to make sure energy supplies remain reasonably resilient, he said.

China is also working on building a clean energy supply system for clean energy, including hydropower, wind, solar and nuclear power. It is also further optimizing its energy mix by building massive wind and solar power facilities in the country's Gobi Desert and other arid regions to facilitate the country's ambition of non-fossil fuels accounting for 20 percent of total energy consumption by 2025 and 25 percent by 2030.

Luo Zuoxian, head of intelligence and research at the Sinopec Economics and Development Research Institute, said that in addition to the rapid development of clean energy, China should make full use of coal as a supportive part of its energy strategy and give full play to the utilization of clean coal.

"Ensuring a sufficient power supply is a major task for China at a time of global market turmoil and China should further enhance its energy security by increasing exploration and exploitation of upstream resources. China will steadily implement its carbon peak and neutrality targets in accordance with its energy resources," Luo said.

According to Ren, the government will also continue promoting construction of energy security monitoring and warning capacity to further enhance the country's capacity in emergency response and disaster relief contingencies.

China's green transition has been gaining momentum in recent years, with total installed capacity for renewable energy generation rising to 1.1 billion kilowatts over the past 10 years, with generation capacities of hydropower, wind, solar and biomass ranking tops in the world, Ren added.