Droughts in parts of country predicted 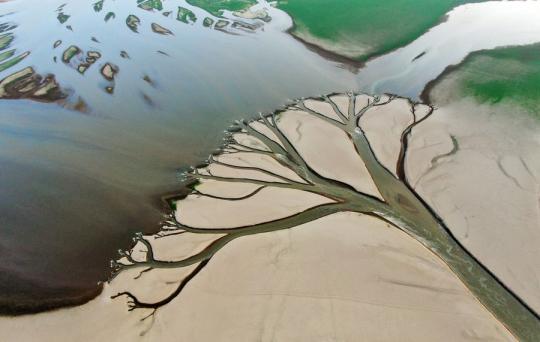 Aerial photo taken on Aug 22, 2022 shows the tidal-flat presenting a landscape of a tree in Jinxian section of Poyang Lake in East China's Jiangxi province. (Photo/Xinhua)

Eastern and southern parts of China are forecast to suffer consistent serious droughts, according to the National Meteorological Center, after several areas have already been through two months of drought this year.

The scorching summer this year caused rare meteorological droughts in the Yangtze River Basin, and as of Monday the center had issued drought warnings for 61 consecutive days.

The droughts have dried up farmland, drained lakes and forced migratory birds to forage in farmland instead of wetlands.

So far, the Hunan provincial government has allocated about 378 million yuan ($52 million) for insurance payouts to farmers as their rice crops have suffered losses from the droughts, Xiaoxiang Morning News reported.

On Oct 5, the lake's Xingzi hydrological station measured a water level of around 7 meters, the lowest since record keeping began in 1951, the center said.

Beijing Daily reported on Monday that dozens of residents from Jiujiang in Jiangxi province, had volunteered to transport stranded fish from Poyang Lake to the Ganjiang River about 10 kilometers away using four trucks.

Other volunteers have cleared large amounts of fishing nets from dried-up lake beds for migratory birds to better rest on, according to Jiangxi Daily.

Local reservoirs have been discharged to increase the lake's downstream section, the center said.

As of Friday, due to recent rain, the drought is showing some signs of being alleviated with the water level at the Xingzi station rising to about 8 meters, the center said.

Zhang Juan, a meteorological analyst at Weather China affiliated with the China Meteorological Administration, said that from June to August, the most intense high-temperature period occurred in central and eastern parts of China since meteorological observation records began in 1961.

The long-lasting extremely high temperatures led to the droughts, she said.

The National Climate Center predicted that precipitation along most parts of the Yangtze River in autumn will be far less than in the same period in previous years, creating risks of more droughts.