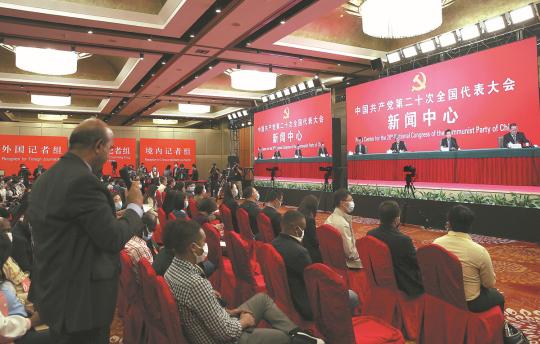 A journalist asks a question at a news conference on the sidelines of the 20th National Congress of the Communist Party of China in Beijing on Monday. Senior Party officials said at the news conference that corruption has been effectively contained in China. (Photo by WANG ZHUANGFEI/CHINA DAILY)

The spread of corruption has been effectively contained in China as the Communist Party of China has made unprecedented efforts to tackle corruption in the past decade, senior Party officials said at a news conference on Monday.

The CPC Central Committee has strengthened the leadership over anti-corruption work, as the CCDI and the NSC worked together to reshape the anti-graft body's leadership, organization, workforce, responsibility and law enforcement, he said.

Under such high pressure, more than 80,000 people have voluntarily reported their misconduct to discipline authorities in the past five years, and the number of tips from the public has been declining for four consecutive years, Xiao said.

Tian Peiyan, deputy director of the Policy Research Office of the CPC Central Committee, said: "The CPC is the largest Marxist ruling party in the world. To govern such a large party well, we must strictly hold ourselves to a high standard of the advanced nature and purity of a Marxist party."

Having a clear understanding of the problems faced by the Party, Xi Jinping stressed in the report delivered at the opening of the 20th National Congress of the CPC that strict Party governance will continue as always, Tian said.

The report, which was delivered by Xi on Sunday, said: "All of us in the Party must bear in mind that full and rigorous self-governance is an unceasing endeavor and that self-reform is a journey to which there is no end."

The mechanism and system have been improved to ensure the self-reform of the Party, Tian said, adding that of the nearly 4,000 Party rules and regulations in force, more than 70 percent were newly formulated or revised in the past decade.

With such strict rules in place, people's satisfaction with the Party's anti-graft campaign has continued to increase.

Xiao noted that discipline authorities have dealt with more than 650,000 cases of corruption and poor working style in the fields of education, medical care, social security, law enforcement and justice, and other areas concerning people's livelihood.

"People's satisfaction has increased significantly," Xiao said, citing data from annual surveys jointly conducted by the CCDI and the National Bureau of Statistics over the past 10 years.

This year's survey found that 97.4 percent of respondents believed that the comprehensive and strict self-governance over the Party is effective, up 22.4 percentage points from 2012.About 99 percent of respondents believed that the measures taken by the Party to improve working style and tackle corruption reflected the Party's spirit of self-reform, he added.