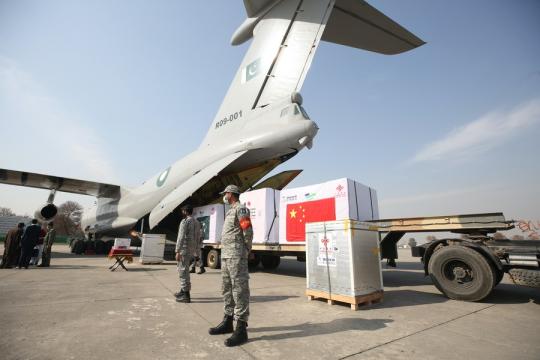 A handover ceremony of a batch of China-donated COVID-19 vaccine is held at Noor Khan Air Base near Islamabad, Pakistan, Feb 1, 2021. (Photo/Xinhua)

The COVID-19 pandemic has "derailed the path" toward meeting the UN's SDGs, said Jorge Chediek, who headed the UN Office for South-South Cooperation and served as the UN resident coordinator and the United Nations Development Program's representative in multiple countries. He is now a visiting professor at the Catholic University in Buenos Aires in Argentina.

The SDGs are a set of integrated goals adopted by the UN in 2015 and include environmental protection, ending poverty and achieving gender equality. They are meant to be achieved by 2030.

The last few years have witnessed "a weakening of the commitment to the global agenda "because a lot of nations have prioritized their own needs, often at the expense of the common good, Chediek said.

A good example is the hoarding of COVID-19 vaccines and therapeutics by wealthier nations, which has made access to lifesaving supplies difficult for people in the developing world, he said.

Chediek also noted that the response to the ongoing energy crisis "has led most developed countries to backtrack on their commitments to addressing the climate crisis".

"In this context, the Global Development Initiative launched by President Xi Jinping in September of 2021 constitutes a constructive challenge to the world community to recommit to the achievements of those goals, with the world community as a whole as a subject and beneficiary of this collective action," Chediek said.

For this purpose, the Global Development Initiative underscores the need to mobilize governments, international organizations, the private sector, civil society and others to coordinate actions and recover lost time, Chediek said.

The GDI is China's new contribution to developing better international partnerships and enhancing human development. It builds on ongoing initiatives such as the Belt and Road Initiative, the Center for International Knowledge on Development and the South-South Cooperation Assistance Fund, he said, adding that the GDI has the potential to contribute greatly to developing countries, which require a lot of assistance to meet the SDGs and have been most affected by the crises of the last few years.

"It is no accident that most of the countries that joined the Group of Friends of the GDI in January come from the developing world," he said.

China launched the group to promote and enhance international cooperation, implement the 2030 Agenda and address global challenges. More than 60 countries have now joined. Chediek praised China's recent announcement that it would significantly expand the South-South Cooperation Assistance Fund and increase contributions to the China-UN Peace and Development Fund. China is "committed to further expanding the sharing of good practices and market opportunities throughout the Global South", he said.

During the UN Sustainable Development Summit in 2015, President Xi announced the establishment of the South-South Cooperation Assistance Fund to support developing countries in implementing the 2030 Agenda for Sustainable Development. In June, the Chinese government allocated an additional $1 billion to the fund on top of the $3 billion that it had already committed.

The China-UN Peace and Development Fund was launched in 2015 to support the UN's work and promote multilateral cooperation. During the 2020 UNGA General Debate, President Xi said that China will extend the fund for five years after it ends in 2025.China has already injected $120 million into the fund since its establishment.

Chediak said that in order to confront global challenges, it is important to enhance multilateral coordination on the many ongoing sectoral and regional initiatives, something he believes the GDI aims to do. "Building on the example of China as the leading developing country in the world, and the increased Chinese contributions to global development, the initiative has the potential to provide much-needed coordination to the many ongoing efforts, and to generate renewed commitments from all the parties," he said.

Chediek also gave a nod to the initiative's goal to create "a more balanced global architecture", where the interests and voices of developing countries are more prominently recognized. "This in itself is a very valuable contribution to balance power relations at the global level, where developed countries still have more relative weight than the emerging South," he said.

He commended China for launching the GDI "at a time when traditional development cooperation is flagging, and many institutions established to promote international collaboration are increasingly out of step with the needs of humankind".