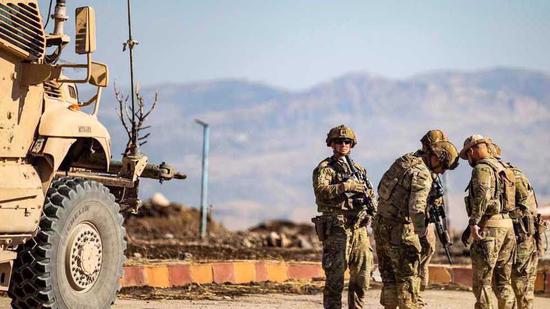 US soldiers gather in front of a military vehicle near the city of Al-Malikiyah in Syria's oil-rich northeastern province of Hasakah near the Turkish border, on August 27, 2020. (Photo by AFP)

(ECNS) -- U.S. forces have stolen 398 tankers of Syrian oil since Aug. 11 and sent them to bases in Iraq, the Syrian state news agency SANA reported on Tuesday.

On Aug. 8, the Ministry of Petroleum and Mineral Resources of Syria said that the average daily output of Syrian oil in the first half of 2022 was 80,300 barrels, while U.S. occupying forces and their "mercenaries" are grabbing an average of 66,000 barrels a day, accounting for over 83 percent of Syria's oil output.

The ministry said that total losses in the oil sector amounted to about $105 billion by the end of the first half of 2022 since the beginning of the war on Syria, causing significant losses to the country's oil industry.

The U.S. has listed Syria as a "state supporting terrorism" and occupied a large area of northeast Syria in the name of "anti-terrorism." But what it has actually done is plundering oil and gas resources in the country. Syria, which used to be an oil exporter, is now an oil importer, aggravating its energy crisis and hindering its reconstruction.

The U.S. has long coveted oil in the Middle East. Former U.S. President Donald Trump has admitted in public that U.S. troops were left in Syria “only for the oil.”

Once a food exporter, Syria now faces an acute food shortage. Two-thirds of the Syrian population relies on humanitarian assistance, and over half are food insecure, further exacerbating the humanitarian disaster in the country.

Meanwhile, the U.S. has imposed strict sanctions on Syria, resulting in a sharp depreciation of the Syrian pound, soaring commodity prices, shortage of materials, and additional misery.

On the pretext of "anti-terrorism", the U.S. has waged a series of wars in Afghanistan, Iraq, Syria, and other countries, which has proven that "anti-terrorism" is nothing but an excuse. It will not hesitate to take risks if there are profits to gain.

Facts have demonstrated that the U.S. has brought no peace to places it has invaded. It violates the sovereignty of other countries, plunders resources, and harms civilians for its global hegemony. It cares nothing about the "democracy" and "human rights" it has long advocated, and is becoming a world robber rather than the “world policeman.”