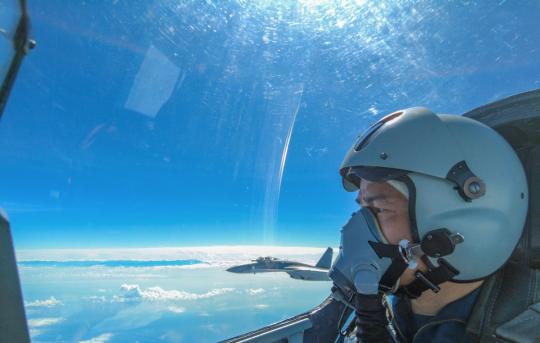 A People's Liberation Army fighter jet pilot flies in formation with another jet on Sunday as the Eastern Theater Command of the PLA continued joint combat training exercises in the waters and airspace around Taiwan. （WANG XINCHAO/XINHUA）

China will continue to lodge stern representations with the United States over U.S. House Speaker Nancy Pelosi's visit to Taiwan, urging Washington to refrain from conniving with and supporting "Taiwan independence" forces and to stop playing the "Taiwan card" to contain China, the Foreign Ministry said on Monday.

Speaking at a regular news conference, ministry spokesman Wang Wenbin urged the U.S. to immediately redress its wrongdoings, stop deflecting blame and escalating the crisis and take real actions to abide by the one-China principle and the three Sino-U.S. joint communiques.

It is completely "gangster logic "for the U.S. to accuse China of escalating tensions while it goes further down the wrong path of violating the one-China principle, Wang said.

China has taken countermeasures in response to Pelosi's visit, including military drills and sanctions. 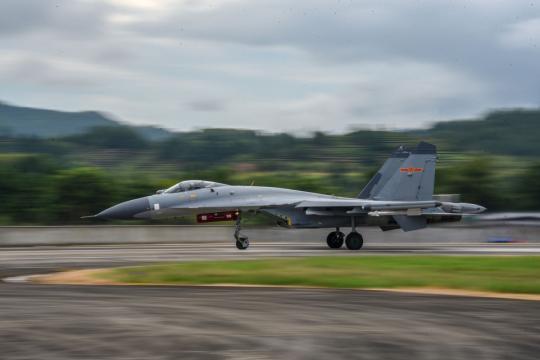 A PLA fighter jet prepares to take off during combat exercises on Sunday. (FU GAN/XINHUA)

The spokesman defended China's countermeasures, saying that they are necessary acts to safeguard its sovereignty and territorial integrity as well as upholding the basic norms of international relations and the international order established after World War II.

Wang also expressed China's firm opposition to a joint statement released on Friday by the U.S., Japan and Australia that called on Beijing to stop military exercises around the island.

In the statement, the three countries added the so-called "where applicable" after the one-China policy. A Taiwan-related statement issued by the G7 last week also took a similar approach.

Wang stressed that the meaning of the one-China principle is clear and definite. That principle is that there is only one China in the world, Taiwan is a part of China and the government of the People's Republic of China is the sole legal government representing the whole of China.

"The application of the one-China principle is universal, unconditional and indubitable," he added.

Over 170 countries have reiterated their commitment to the one-China principle and strong support for China's legitimate positions, constituting an advantage over the U.S. and the handful of its supporters, he said.

In response to Pelosi's visit, the People's Liberation Army's Eastern Theater Command on Monday continued to conduct combat training exercises around Taiwan, the command said in a statement.

China's countermeasures to Pelosi's visit are "fully reasonable, appropriate and moderate" and serve as a necessary warning to the provocations from the U.S. and the Taiwan region, said Senior Colonel Wu Qian, a spokesman for the Ministry of National Defense.

Wu emphasized that "the bottom line cannot be breached and the communication needs sincerity", expressing firm opposition to the U.S. side for creating a crisis, seeking a pretext for its provocations and misleading public opinion.

Wu urged the U.S. to respect China's core interests and major concerns and "give up the illusion of containing China by using Taiwan".