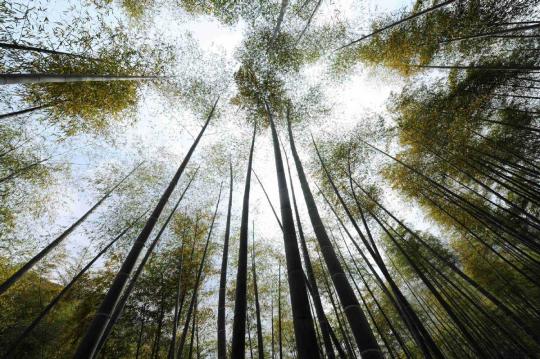 To counter the widespread use and environmental damage caused by single-use plastics, a Chinese research institute has proposed developing new technologies by using a more eco-friendly substitute－bamboo.

The proposal, announced on Thursday by the International Centre for Bamboo and Rattan, comes in the wake of the Bamboo as a Substitute for Plastic Initiative introduced at the High-level Dialogue on Global Development held virtually in Beijing in June.

Fei Benhua, director of the International Centre for Bamboo and Rattan, said bamboo-straw manufacturing technology could be realized and used to replace plastic straws on a large scale, adding that using bamboo to make straws is just the beginning.

"There is a huge space for the initiative to develop," he said, quoting government data that the world produces nearly 400 million metric tons of plastic every year for use in packaging, construction, catering and other purposes, and that China's delivery industry annually produces about 1.8 million tons of plastic waste.

Jiang Zehui, co-chair and acting chair of the International Bamboo and Rattan Organization (INBAR), said that moving forward with the initiative and developing more technologies and ways to use bamboo instead of single-use plastics will lay a solid foundation for the future.

A sharp rise in single-use plastics, which are produced almost entirely from fossil fuels, has damaged the well-being of the planet, according to INBAR. After being discarded, they enter terrestrial and marine ecosystems, and as they break down they degrade into microplastics that contaminate food sources, creating a significant risk to human health.

Bamboo, on the other hand, which is fast-growing, resilient and sustainable, can be used as a substitute for single-use plastics. Bamboo can be used to produce cups, straws, paper and packaging, while being recyclable and environmentally friendly, the organization said.

The potential knock-on effects of using bamboo are also good for the environment.

Planting bamboo can restore degraded or deforested land, mitigate soil erosion and act as a food source for vulnerable or endangered animal species, such as the giant panda and mountain gorilla. Its ability to thrive in suboptimal soil types and rapidly mature, as well as it being a carbon sink, make it ideal for agroforestry.

Given that 50 million hectares of bamboo are distributed across Asia, Africa and the Americas, there is immense potential to scale up learned lessons and experiences across regions, according to INBAR.