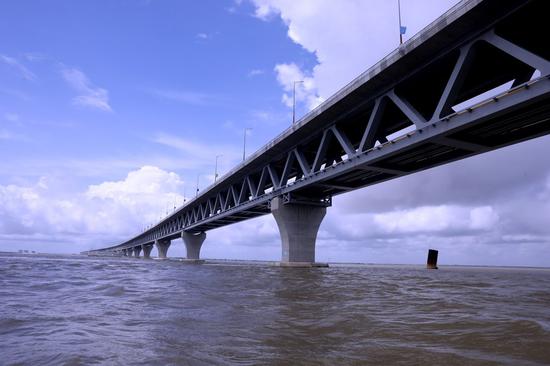 Installation of rail tracks on the lower deck of Bangladesh's Padma Bridge built by a Chinese enterprise is expected to start this week.

The 172-km Padma Bridge Rail Link Project is also one of the most significant projects under construction by the China Railway Group Limited (CREC) in Bangladesh.

The rail link will pass through the bridge, the largest of its kind in Bangladesh, which was built by the China Railway Major Bridge Engineering Group Co, Ltd.

The Padma Bridge is located about 40 km southwest of Dhaka, with a total length of 9.8 kilometers, and of that, the main bridge is 6.15 km long.

The history of crossing the mighty Padma river between dozens of districts in southern Bangladesh and the capital of Dhaka only by ferries or boats ended last month as the bridge opened to traffic.

After visiting the rail link's Mawa station on the outskirts of Dhaka, Bangladeshi Railways Minister Nurul Islam Sujan said, "We expect that the installation of rail tracks on the lower deck of Padma bridge will start from next week."

He said it will be possible to run trains on one of the Rail Link Project's three sections -- Dhaka to Bhanga in central Faridpur district for some 81 kilometers by June 2023.

The rail link, also a vital channel that connects the trans-Asian railway network, is expected to greatly promote regional connectivity and economic development of Bangladesh.