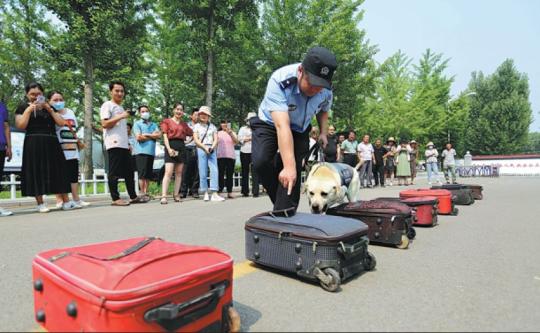 A drug detection dog sniffs suitcases as it searches for illicit drugs in a demonstration given by police in Yinan county, Shandong province. (Photo/Wang Yanbing For China Daily)

China has the strictest drug control measures in the world and the largest number of listed controlled substances, and control efforts continue to be improved, said a senior anti-drug official on Thursday.

Last year, China added 58 new drugs to their list of controlled drugs, and its efforts have resulted in all fentanyl and synthetic cannabinoid substances being put under control. The nation now has 449 kinds of narcotics and psychotropic substances on the list, said Liang Yun, head of the narcotics control bureau of the Ministry of Public Security.

"We also launched special operations targeting fentanyl and drug crimes as well as the research, development and manufacture of new drugs, ensuring that there is no large-scale abuse of the substances," Liang said. "China now has the largest number of listed controlled drugs and the strictest drug control in the world."

The loss of precursor chemicals has also been effectively curbed with strict rectification. Last year, an additional 15 types of such chemicals were included in the control list, and mechanisms for checking end-users, monitoring their distribution and verifying their sources were improved to crack down on related crimes, he said.

With the tough anti-drug measures and advanced drug control system in place, remarkable achievements have been made in drug control, with drug-related crimes, the number of drug users and negative effects seen by drug use trending downward.

A survey conducted by the National Bureau of Statistics showed that 96.78 percent of the interviewees were satisfied with the anti-drug efforts last year, he said.

By the end of last year, there were 1.48 million registered drug users nationwide, down 42.1 percent from the end of 2016. Moreover, 3.4 million people who quit using more than three years ago haven't relapsed, about 2.4 times more than in 2016, according to Liang.

The ministry has deployed multiple operations to target drug crimes at the source in recent years. Over the past five years, police nationwide resolved 451,000 drug-related cases, captured 588,000 suspects and seized 305 metric tons of drugs. The number of drug cases dropped from 140,000 in 2017 to 54,000 last year.