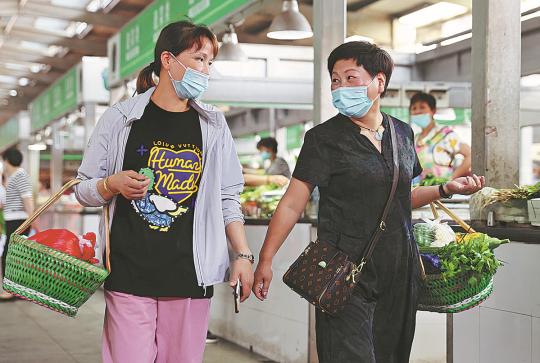 China has essentially completed its policy infrastructure for the country's ambitious climate targets and has made significant progress in low-carbon transition, government officials said at the 10th National Low-Carbon Day on Wednesday in Jinan, Shandong province.

China has hammered out implementation plans for various sectors to help achieve the targets of peaking carbon dioxide emissions before 2030 and realizing carbon neutrality before 2060, including for energy, manufacturing and transportation, Xie Zhenhua, China's special envoy for climate change, said via video link.

A series of supporting measures for technology, taxes, finance and carbon sinks have also been worked out, he said, adding, "Some of the documents have been unveiled, and some will be made public very soon."

Those documents, together with two guidelines from the central authorities, mean that the "1 N "policy system for the country's climate targets has been basically established, according to Xie.

On Oct 24, the Communist Party of China Central Committee and the State Council, the nation's Cabinet, unveiled a master guideline for the work needed to achieve the climate targets, laying out specific goals and measures for the coming decades.

The October guideline is the overarching document dubbed"1" in the"1 N" policy system.

Together with an action plan for peaking carbon dioxide emissions from the State Council, it constitutes the country's top-level design that will go all the way through the two stages of carbon peaking and neutrality.

The "N" refers to specific plans from different sectors.

The country will draw on other nations' strengths through mutual learning and pragmatic cooperation, as it endeavors, together with countries around the world, to make significant progress in global climate governance in the coming decade, he continued.

Zhao Yingmin, vice-minister of ecology and environment, noted the significant progress made so far, as China strives to promote low-carbon transition to help address climate change, which he describes as "a severe challenge facing humanity".

Compared with 2005 levels, for example, carbon emissions per unit of GDP in China last year had dropped by 50.3 percent, he noted. With half of the world's total new energy vehicles, the country has outpaced all others in the production and sales of such vehicles for seven straight years.

The vice-minister, however, also emphasized that the country still needs to address great challenges to reach carbon neutrality.

As the world's largest developing nation, China plans to peak emissions and go carbon neutral in a much shorter time period compared with developed economies. This means China has to make much more arduous efforts, he said.

Against this backdrop, Zhao said the country needs joint efforts from all sectors of society to implement the new development philosophy and contribute to the transformation toward green, low-carbon, circular and sustainable production modes and lifestyles.

He also called for a proactive response from the public to the country's goal of planting and conserving 70 billion trees in a decade.