Shanghai aims to curb spread to other places 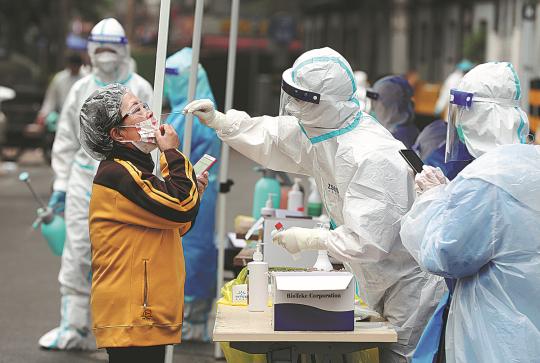 Medical workers test a Shanghai resident for the novel coronavirus on April 26, 2022, during a citywide testing. (Photo by ZHU XINGXIN/CHINA DAILY)

Shanghai has taken stringent measures to curb the spread of the COVID-19 outbreak to other provinces, the city government said on Tuesday.

Checkpoints have been placed at airports, railway stations and highway entry points to ensure all outbound passengers have valid test reports, he said.

The center for disease control and prevention has been working closely with its counterparts across the country to perform epidemiological investigations related to those who have left the city.

Zhao said the city has also urged better management and protection of those who have come to aid Shanghai, such as truck drivers and the construction workers who built the makeshift hospitals, to ensure their safety.

The city reported 1,661 locally transmitted COVID-19 confirmed cases and 15,319 asymptomatic infections on Monday, a decline of 13 percent from Sunday.

"This is the biggest drop since the downward trend of daily infections began," said Sun Xiaodong, deputy director of the city's center of disease control, adding that 90 percent of the new infections were discovered among those still in quarantine.

Yet the city's daily new infections still fluctuate at a relatively high level because management and control measures were limited in some downtown areas where unfavorable living conditions can easily lead to cross infections, Sun said.

"We have been accelerating the transport and quarantine of people with exposure risk to the virus, and strengthening environmental disinfection in those key areas," Sun added.

Shanghai reported 52 fatalities on Monday, bringing the death toll of the current outbreak to 190, said the health commission. The average age of those who have died is 82.5, with the youngest being 33 and the eldest 101. All cases, except for the 33-year-old, suffered from serious underlying diseases, including advanced-stage cancer, severe cardiovascular diseases, nervous system diseases, late-stage liver cirrhosis, diabetes and uremia. The 33-year-old, who had a severe autoimmune ailment, died of sudden cardiac failure. Only 12 of these individuals were vaccinated.

Liu Yingfeng, deputy director of Shanghai's big data center, said the center will turn a resident's health code red for scenarios such as a positive nucleic acid test; confirmed or suspected of being an infected case; being a close contact of infected cases; arriving from overseas except Macao without completing quarantine; and coming from high-risk areas.

Individuals who miss the necessary tests will be given a yellow health code, along with those under self health monitoring at home, secondary contacts of COVID-19 cases and those from medium-level risk areas, Liu said.

Liu said people can appeal a change in their health code if they disagree with it via the 12345 hotline, the Sui Shen Ban mobile app or mini apps on WeChat.