Partnership tipped to welcome more members in next few years 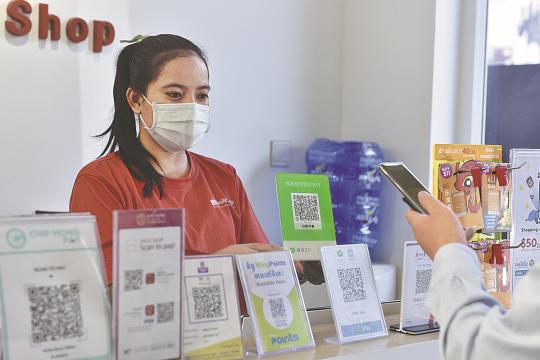 A customer scans a QR code for payment at a Smile Shop store in Phnom Penh on Dec 21. The e-commerce platform hopes to benefit from implementation of the RCEP. (WU CHANGWEI/XINHUA)

Signs are already emerging that the Regional Comprehensive Economic Partnership, or RCEP, could expand beyond the one-third of the world it already covers.

Allan Gepty, assistant secretary for international trade policy and trade negotiation at the Philippines Department of Trade and Industry, who was the country's lead RCEP negotiator, said eliminating tariffs means "people can have cheaper access to raw materials and intermediate goods necessary for production and manufacturing activities".

The partnership, covering 15 countries that are home to about one-third of the world's population and some 30 percent of global GDP, could grow in size over the next few years. The trade pact includes a provision that allows for "accession by any state or separate customs territory 18 months after the date of entry into force".

Gepty is optimistic that more economies will seek to join the agreement.

"The RCEP has an open accession clause for any state or separate customs territory. Given the extent of economic activities in the region, such as research and development, product development, innovation, manufacturing and marketing, it is expected that more participation will be attracted from other states or customs territories," he said.

One possible addition is India, home to nearly 1.4 billion people. The country was involved in RCEP negotiations from the start, but bowed out in 2019 over concerns that the deal could worsen the trade deficits India has with most of the other members.

Japan's Cabinet Secretary for Public Affairs, Noriyuki Shikata, told journalists on March 20: "The RCEP will benefit the Indian economy with a better supply chain, especially with ASEAN countries. India will be treated exceptionally as a founder member, and if India is willing to negotiate its entry to the RCEP, Japan would be happy to take a lead on that."

Another likely RCEP entrant is the Hong Kong Special Administrative Region of China, which operates as a separate customs territory.

Lo Sai-hung, director-general of Hong Kong's Trade and Industry Department, said the city made a formal request to join the RCEP in January, immediately after the agreement took effect in most members.

The benefits would be significant. Merchandise trade between Hong Kong and RCEP members stood at $963 billion last year, about 73 percent of the city's total trade in goods. In 2020, Hong Kong's trade in services with these countries came to $56 billion, about 48 percent of the local total.

"These figures speak for themselves," Lo said. "Joining the RCEP will allow Hong Kong goods and companies to benefit from a series of measures under the partnership, including tariff reductions, better market access, removal of trade barriers, and streamlined customs procedures … thus lowering trading costs and providing Hong Kong goods and companies with new opportunities to expand their markets in the region."

Lo said joining the RCEP could help Hong Kong with re-industrialization. "After our accession, local manufacturing, especially in high-end industry, will benefit not only from tariff reductions but also from the unified rules of origin," he said.

However, Lo added, "Joining free trade agreements is always challenging, not least an FTA which is as comprehensive in terms of coverage and membership as the RCEP."

He expects that Hong Kong will negotiate with most or all of the 15 current members, including Japan and the Republic of Korea－nations with which it does not have an FTA.

Lo expects the RCEP's economic influence to extend far beyond its membership.

"Further down the road, we envisage that the RCEP will set a new standard for future FTAs and play a predominant and leading role in regional economic integration," he said.

The writer is a freelance journalist for China Daily.