Why Western mudslinging has failed to dampen Xinjiang cotton 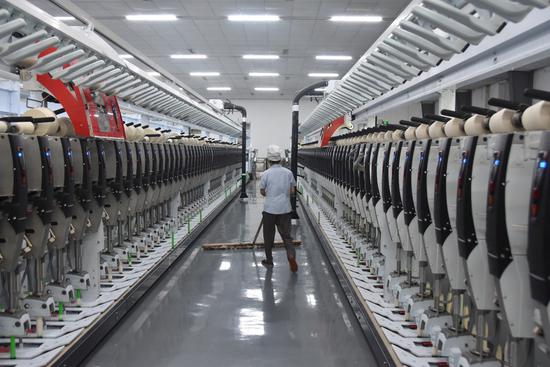 In a textile plant in the city of Shihezi, northwest China's Xinjiang Uygur Autonomous Region, machines with 100,000 spindles rumbled to spin cotton into yarn.

"We are producing at full capacity as Xinjiang yarn is in heavy demand from downstream companies," said the production director of the plant. "Our yarn sales have rebounded markedly in the past few months and we have little inventory left."

Despite the Xinjiang cotton boycott instigated by some Western politicians under the pretext of "forced labor," the region's cotton and textile industry has shown resilience by further tapping markets and winning over more customers with its superior quality.

Xinjiang is the largest cotton growing area in China. The region's cotton output hit 5.16 million tonnes in 2020, accounting for 87.3 percent of the total in the country, according to the National Bureau of Statistics.

Demand for Xinjiang cotton has continued to increase as stocks decreased in recent months, according to the China Cotton Association (CCA).

By the end of May, the inventory turnover of commodity cotton in 43 warehouses in Xinjiang stood at 1.97 million tonnes, down by 502,700 tonnes over end-April.

"There's an upside about Western boycott of Xinjiang cotton: it gets a lot of free publicity," Zhou Run, head of a cotton farmers' cooperative in Shihezi, said in a lighter vein.

"Many farmers are willing to grow cotton because of the handsome income and the high mechanical picking rate," said Zhou, noting that a member of his cooperative rented 133 hectares of cotton farmland this year.

The West's mudslinging campaign has not only put Xinjiang cotton under the global spotlight but also drawn many consumers to its high quality, which is attributed to ample sunshine, arid weather and significant temperature differences between day and night.

Many apparel companies are proud to show off their use of Xinjiang cotton as a signature of high quality. Chinese brand Li-Ning has been putting "made of Xinjiang cotton" on their price tags. A cotton sample is even attached to some products.

"After the boycott, many teenagers have come to our store specifically asking for clothes made of Xinjiang cotton. Sales can go over 100 pieces a day," said Huang Qiuyan, a saleswoman in a Li-Ning store in Shihezi.

Textile products made of Xinjiang cotton are also popular at Chinese stores of Japanese retailer Muji, which has said it would continue to use Xinjiang cotton as no proof of forced labor has been found. On many e-commerce platforms, "made in Xinjiang" or "shipped from Xinjiang" were highlighted as sales boosters.

The CCA expected the country's cotton consumption to expand about 5.9 percent year on year in the 2020-2021 period.

In the first four months of this year, China's export volume of cotton textiles and garments hit 19.7 billion U.S. dollars, up 44 percent year on year, according to China Chamber of Commerce for Import and Export of Textiles.

The growth rate is also 11 percentage points higher than that of total textiles and garments exports over the same period.

"Despite the impact of the Xinjiang cotton boycott, the demand for Chinese cotton products in the international market is very strong," said Zhang Xi'an, deputy director of the chamber.

In late April, the CCA launched an initiative to promote the sustainable development of China's cotton, after signing deals with leading domestic cotton producers, some of them in Xinjiang.

"China's cotton has contributed a lot to the global cotton industry and we deserve fair treatment and due respect," said CCA director Gao Fang.