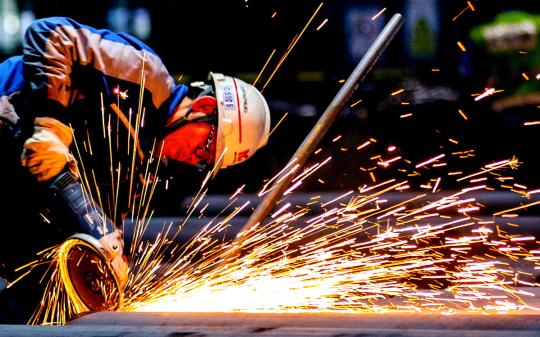 Enterprises to benefit from reduction in fees of payment services, official says

China has stepped up policy support to spur economic growth and help vulnerable smaller and private businesses, as policymakers consider channeling more funds into the market by cutting the reserve requirement ratio for financial institutions.

The country will adopt monetary tools such as cutting the RRR, which is the cash amount that financial institutions are required to deposit in the central bank, to increase the financial support for the real economy, according to a State Council executive meeting chaired by Premier Li Keqiang on Wednesday.

The RRR cut will be adopted "at an appropriate time" and aims to mitigate the impact of commodity price increases on the operation of companies, the meeting decided. It also reiterated the policy stance of refraining from mass stimulus, maintaining the stability of monetary policy and enhancing its effectiveness.

The decision of China's policymakers to cut the RRR came as the country is scheduled to release key economic data next week, including GDP for the second quarter, which will shed light on the outlook for China's economy. The mention at the State Council meeting of cutting the RRR was unexpected, as other major central banks are considering monetary tightening, economists said.

Fan Yifei, deputy governor of the People's Bank of China, the central bank, said at a news conference on Thursday that the PBOC will continue to implement a prudent monetary policy.

China's monetary authorities will take advantage of the reform of the benchmark lending rate, or the loan prime rate, and improve regulations on the deposit rate. The real lending rate for enterprises should be further reduced, especially to promote the financing of small and micro companies at lower costs, Fan said.

The State Council has decided to cut fees of payment services for market entities, which is expected to save 24 billion yuan ($3.7 billion) overall and more than 16 billion yuan for small, micro and private businesses each year. The measure will help to improve the business environment and promote consumption, Fan said.

Beijing's overall policy solutions to the surging raw material prices include the use of policy easing rather than policy tightening to contain the rise of commodity prices, said Lu Ting, chief economist in China at Nomura Securities.

"The use of such a high-profile tool like an RRR cut surprised both us and the market," Lu said.

Lu predicted that the PBOC will deliver a 50-basis-point universal RRR cut in coming weeks, while other economists, such as Iris Pang from ING Bank, foresee an RRR cut that is targeted for small and medium-sized enterprises only.

"This could be a surprise for markets at a time when other major central banks are talking about rate hikes and the taper timetable," said Pang, referring to a reduction of asset purchases.

US financial group Goldman Sachs predicted that the US Federal Reserve may implement the first rate hike in the second half of 2023. Before that, it is likely to officially announce a "tapering" policy as early as in December this year.

Shan Hui, chief China economist at Goldman Sachs, said on Thursday that the State Council's signal of an RRR cut may indicate the end of a periodical tightening of credit and macroeconomic policies. The growth of total social financing and money supply probably have hit the bottom in the second quarter.

Improving the credit supply in the second half is likely to drive up government-led investment－a major force that can sustain economic growth in the coming months, Shan said at a media briefing.

In terms of policy rates, China is unlikely to adjust the rate level in 2021, Shan said. It will be more appropriate to balance the uneven economic recovery through adopting targeted measures rather than changing the monetary policy in a broad range, the economist said, adding that fiscal measures will be strengthened in the second half to support the economy.