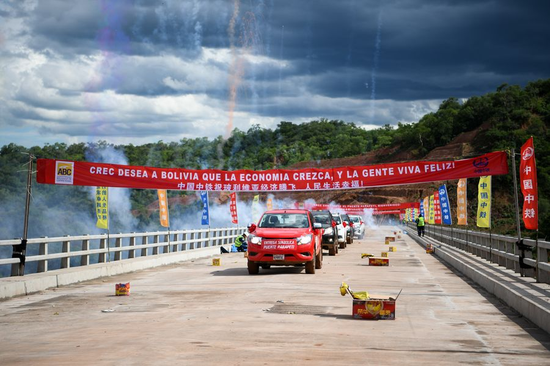 A Mexican academic has spoken highly of China's contribution to the development of infrastructures in Latin America and the Caribbean, saying that China's efforts have also helped create many direct and indirect jobs along the way.

Speaking to Xinhua in an interview, Mexican academic Enrique Dussel Peters said that China's cooperation with Latin American countries "will continue to deepen" in all areas under a spirit of mutual trust and win-win results.

There is a "heterogeneous" connection between the two that is not limited to the economic, trade and political spheres, explained the coordinator of the Latin American and Caribbean Academic Network on China (RED ALC-CHINA), who recently led the Latin America and the Caribbean and China Fifth International Seminar: Conditions and challenges in the 21st century.

Some 150 specialists from more than 20 countries participated in the three-day seminar starting on June 14, recognizing that Latin America and China should establish closer collaboration to forge a common destiny of development and work together within international cooperation mechanisms to promote prosperity for both Chinese and Latin American peoples.

Dussel Peters praised China's contribution to infrastructure in Latin America and the Caribbean, its growing development in recent years, and its creation of direct and indirect jobs, demonstrated by a database on projects that was compiled by the RED ALC-CHINA network itself.

The network -- with more than 600 members from Latin America and Caribbean (LAC), China, the United States and Europe -- has listed 138 Chinese infrastructure projects carried out from 2005 to 2020 in the Latin American region.

These initiatives, worth some 94.09 billion U.S. dollars, have generated 600,663 jobs, and turned 2020 into a "standout" year for its record-high number of infrastructure projects despite such external factors as "the COVID-19 pandemic or the tensions in the region due to the United States," said Dussel Peters.

In 2020, 24 infrastructure projects worth 17.846 billion U.S. dollars were carried out, generating 210,180 jobs, according to the academic, who is also coordinator of the China-Mexico Studies Center at the National Autonomous University of Mexico.

"It is a very dynamic relationship that has a lot to do with the subject of infrastructure projects, and everything indicates that it will continue to grow in the region," he said, noting "the important diversification in recent years" in cooperation.

Data presented by the network in the "Monitor of Chinese Infrastructure in Latin America and the Caribbean 2021" show the main characteristic of China's recent infrastructure projects in LAC is "their significant" diversification, said Dussel Peters.

Five infrastructure projects were launched last year in Mexico, including the participation of the China Communications Construction Company in the Mayan Train, with an estimated investment of 772 million U.S. dollars, and generating around 80,000 jobs, said the academic.

For the members of the network, according to Dussel Peters, the relationship between China and the Latin American region is on the right track, but further mutual knowledge and understanding is required to better understand needs of both.

Interest in "China's presence in tourism, in learning through the Chinese-Mandarin language and other areas" will also continue to grow in Latin America, "and that is why we have to improve ... learning about China," he said.

He also believes it is necessary for both parties to redirect cooperation through the Forum of the Community of Latin American and Caribbean States (CELAC) and China, to "take advantage of a series of proposals to promote economic zones, trade, investment, science, technology, education and other topics of common interest."

"I believe that a new dynamic is required for this China-CELAC Forum," he concluded.