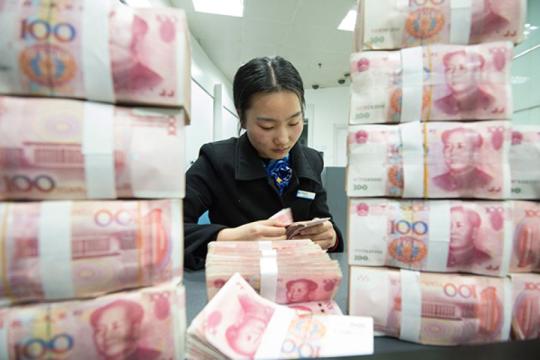 Guo Lei, chief economist of GF Securities, showed positive expectation of China's GDP growth, which is estimated to increase 9 to 9.5 percent year-on-year, and 11 to 12 percent in nominal terms.

More attention should be given to the economic development trend on a monthly basis, Liang said. As government tightens controls on real estate and export slightly drops, China's macro-economy will shoulder certain downward pressure.

On Tuesday, the IMF issued its latest World Economic Outlook, increasing China's growth projection to 8.4 percent for this year, up 0.3 percentage points from its January forecast.

China's consumer price index, a main gauge of inflation, increased 0.4 percent year-on-year in March, versus a 0.2 percent decline in February, and the PPI rose by 4.4 percent from the previous year.

"CPI and PPI will keep rising by the end of the second quarter," Guo said.

On Thursday, the State Council's financial stability and development committee called for efforts to stabilize prices and to keep a particularly close eye on commodity prices.

Besides, the central bank has also stressed maintaining an accurate, flexible, reasonable and moderate monetary policy, and committing to "no sharp policy shift" - being not in a hurry to lift the temporary measures taken during the COVID-19 outbreak.

Cui Li, chief economist of CBB International, said the credit and social financing is slowly tightening. "The central bank will make some adjustments in liquidity operations and expectation management."

BOC International's global chief economist Guan Tao said the central bank will continue to adopt the innovative structural monetary tools this year, while it depends on the market liquidity on whether to increase the supply of base money or cut the reserve ratio.

"There may be a rate hike this year, but not in the second quarter," Wang added.

But in Liang's view, although PPI and inflation will go up, they will not add risks to the central bank to raise interest rates.

"The general tone this year is to stabilize the currency and tighten the credit at the same time," Liang said, adding that "social finance growth in 2021 is likely to be around 11 percent, or even lower."

According to Guan, data of the first two months showed that 1.48 million new jobs were created this year, an increase over last year, but lower than the figure of same period in 2018 and 2019.

Relevant policy support in employment should continue for a while, he said.

"Huge uncertainty exists in inflation. If there is no significant upward in CPI, the policy interest rates may not change much," Guan said.

"The policy interest rate will not change this year," Cui said, adding that "since the overall situation is complicated, and the central bank itself is cautious in this regard."