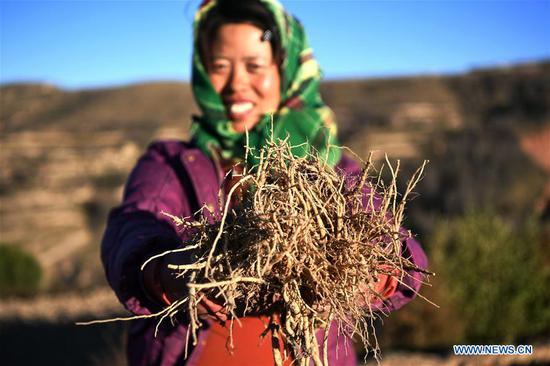 The provincial government has set the goal of realizing 66 billion yuan (about 10 billion U.S. dollars) in the output value of the whole industrial chain of Chinese herbal medicines by 2023, according to a promotional event held over the weekend.

As a traditional growing area of Chinese herbal medicines such as Angelica sinensis and Codonopsis pilosula, Gansu has 310,000 hectares of herbal plantation area with the output in 2019 amounting to 1.3 million tonnes and the output value chalking up 44 billion yuan.

The city of Dingxi in Gansu is one of the driest and least-developed areas of western China and was declared "uninhabitable" for humans by visiting UN experts in the 1980s. People living here had long been mired in poverty until last year, when the city was among the last batch of impoverished areas in Gansu removed from the poverty list. Drought-resistant farming such as herbal medicine and potato cultivation has contributed greatly to the local economy.

Minxian County of Dingxi is known as the "hometown of Angelica sinensis in China," where 50 percent of its cultivated land is used to grow the herbal medicine yielding profits accounting for 60 percent of the net income of farmers in the county.

Looking into the future, the provincial government has planned to cultivate the development of the industrial chain of herbal medicines. It hopes to nurture 76 leading enterprises by 2023.