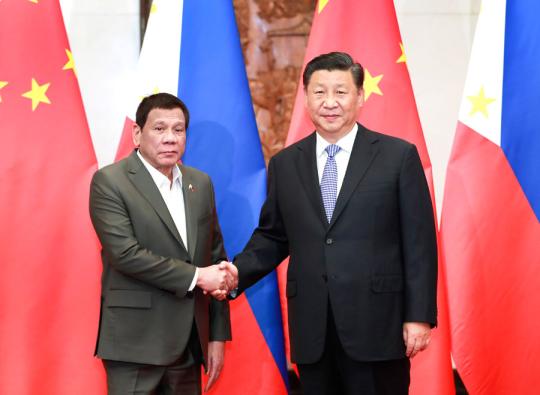 When Philippine President Rodrigo Duterte visited China recently — his fifth visit since taking office in 2016 — President Xi Jinping received him at the Diaoyutai State Guesthouse in Beijing and referred to him as "my old friend".

Although differences over the South China Sea remain, the relationship between China and the Philippines has ticked upward in the past three years.

Duterte told Xi he stands ready to work with him to push forward the robust development of the China-Philippines comprehensive strategic partnership for mutual benefit and win-win results. The partnership was established in November last year when Xi made a state visit to the southeast Asian nation.

The Philippines is one example of the partnership diplomacy China uses to strengthen relationships with its neighbors. It is a friendly style that features amity, sincerity, mutual benefit and inclusiveness.

With the spirit of partnership in mind, Xi has guided the nation to build friendly relations with various countries by expanding the convergence of interests with them, said Yang Jiechi, a member of the Political Bureau of the Communist Party of China Central Committee and director of the committee's Foreign Affairs Commission office, in a signed article in the most recent issue of the Qiushi Journal, the committee's flagship magazine.

Acting on Xi's Thought on Diplomacy, China has been expanding its all-around strategic posture in foreign relations and is striving to develop global partnerships, Yang said.

As of June, China had forged partnerships with 110 countries and regional organizations in various forms, including 60 comprehensive strategic partnerships, the Foreign Ministry said.

As part of its effort to develop major-country relationships, China has been working to intensify its comprehensive strategic partnership of coordination with Russia; advance the China-US relationship based on coordination, cooperation and stability; and build the China-EU partnership for peace, growth, reform and civilization, Yang said.

It also strives to build a framework for major-country relations featuring overall stability and balanced development, he added.

In addition, China has made consistent efforts to support and develop strategic partnerships with Latin American and Middle Eastern countries, and continues to enhance unity and cooperation with emerging markets and developing countries to build up positive forces for peace and development.

Xi proposed the idea of developing global partnerships in November 2014 at the Central Conference on Work Relating to Foreign Affairs. At the meeting, he underlined the need for China to make more friends while abiding by the principle of nonalignment and to build a global network of partners.

The idea has been frequently mentioned by Xi on international occasions ever since. At the Group of 20 Summit in June in Osaka, Japan, Xi called on members to uphold the partnership spirit and resolve differences properly.

"Given the different development stages of G20 members, it is only natural that we may have diverging interests and views on some issues," Xi said. "The important thing is to always promote partnership and treat each other with respect and trust, and in that spirit engage in consultation as equals, manage differences while seeking common ground and build greater consensus."

Zhou Fangyin, a China foreign policy researcher at the Guangdong Institute for International Strategies, said developing global partnerships is China's peaceful approach to the pursuit of development in the existing international system.

Different from alignment, which some countries seek as way of boosting alliances and security, Zhou said, China's partnership diplomacy pursues all-around cooperation in such areas as economy, politics, diplomacy and security.

Partnership is crucially significant for addressing the common challenges facing the world, given the rise of unilateralism and protectionism, he said.

To build a global network of partners, China proposed a new type of international relations underpinned by mutual respect, fairness, justice and win-win cooperation. It put forward and followed a policy of upholding justice and pursuing shared interests and championed a new vision featuring common, comprehensive, cooperative and sustainable security, he said.

Wang Lian, a professor at the School of International Studies at Peking University, said China is firm in its resolve that all countries, regardless of their size, strength or level of development, are equal members of the international community, and it supports the multilateral system, which has the United Nations at the core.

This position reflects the universal consensus of most countries in the world, and conforms to the common interests of the international community, Wang said.

He said China has made consistent efforts to improve the global partnership network with a view toward working with other countries to strive for shared, sustainable, win-win development through joint contributions, which in turn will lead to development opportunities for all.

Developing countries have long been China's stated priority in promoting global partnerships. In a speech at the 73rd Session of the United Nations General Assembly in September last year, State Councilor and Foreign Minister Wang Yi said strengthening cooperation and solidarity with developing countries has been, and will continue to be, a firm strategic priority in China's diplomacy.

"No matter how strong China has become, and no matter how the international landscape may change, this strategic priority will remain unchanged," Wang said.

Through multilateral platforms such as the Forum on China-Africa Cooperation, BRICS, the Forum of China and Community of Latin American and Caribbean States and China-Arab States Cooperation Forum, China has been endeavoring to develop closer partnerships with developing countries.

At the FOCAC Beijing Summit in 2018, Xi announced the eight major initiatives for partnerships with African countries, which focused on industrial promotion, trade facilitation and infrastructure connectivity.

Desta Tesfaw, an Ethiopian student who completed his doctoral program at Peking University's Institute of South-South Cooperation and Development, said that in the current highly globalized world, China's current and future development has direct and indirect effects on the progress of other developing countries.

In September 2015, Xi announced that China would set up the South-South institute during the High-Level Roundtable on South-South Cooperation to share the experience of China and other developing countries and to advance and ultimately realize the goal of sustainable development by 2030.

"We appreciate China's exemplary and elder brother's role in South-South cooperation and development, which is guided by the principles of mutual benefit, solidarity and equality," Tesfaw said.

He told Xinhua during the expo that there is huge potential for China and Arab states to cooperate in science and technology, with the rapid development of state-of-the-art technologies such as 5G, AI, blockchain and the internet of things.

"This is in line with the interests of both sides," he said. "It helps open up new markets for Chinese commodities and also contributes to the implementation of Arab states' own development plans."

The Belt and Road Initiative has been a platform for China to build global partnerships, as it has been well-accepted by many countries since it was proposed by Xi in 2013. As of July, 136 countries and 30 international organizations had signed cooperation agreements with China on Belt and Road projects.

Khikmatullo Kudratov, a scholar from Tajikistan, said the BRI can be a major breakthrough for the developing countries to become closer to the world market and increase their trade volume.

China has assured the world that it will continue to expand global partnerships through the BRI.

Xi told participants at the second Belt and Road Forum for International Cooperation: "Either in good times or bad, either on a smooth road or a thorny path, we will uphold the spirit of partnership. ... For we all believe that our people deserve a better world, and Belt and Road cooperation will make the world a better place."