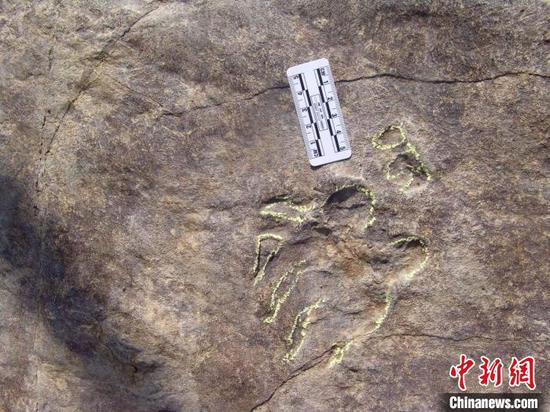 (ECNS) -- Over 20 rare turtle footprints of diverse lengths and shapes have been discovered in Zhucheng, East China's Shandong Province, said Chen Shuqing, a staff member at the Dinosaur Culture Research Center of Zhucheng, on Monday.

Most of the footprints are two to five centimeters in length except one, which is intact and 12 centimeters long and 11 centimeters wide. This footprint was named “Enact Zhucheng footprint” based on its shape, said Chen.

According to Chen, this footprint, belonging to a new species of the early Cretaceous about 120 million years ago, has five toes and is concave.

"Compared with dinosaur footprint fossils, turtle footprints are rarely found in China, and related research is in its infancy," said Chen, adding that the “Enact Zhucheng footprint” is of great value to the study of paleogeography, paleoclimate and paleogeomorphology.

The research results have been published in the magazine Geological Review.

More than 30 dinosaur fossil burial sites with a total area of nearly 1,000 square kilometers have been discovered in Zhucheng since the 1960s, winning it the name "Dragon City of China."