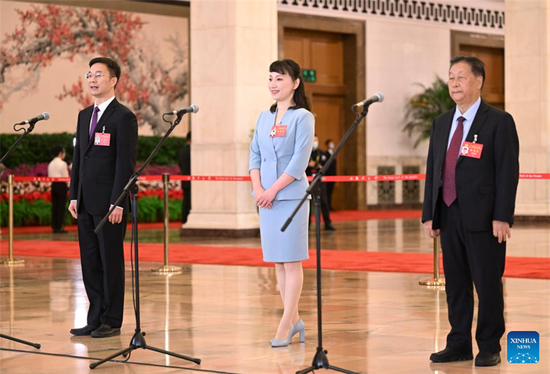 Delegates to the 20th National Congress of the Communist Party of China (CPC) Zhou Wei, Yang Yu and Lin Zhanxi (from L to R), attend an interview at the Great Hall of the People in Beijing, capital of China, Oct. 16, 2022. The CPC will open its 20th national congress on Sunday. (Photo/Xinhua)

(ECNS) -- An official from Papua New Guinea has named his daughter after China’s Juncao to commemorate China’s assistance, said Lin Zhanxi, a delegate to the 20th National Congress of the Communist Party of China, in Beijing on Sunday.

Juncao, which literally means fungi and grass, was invented by Lin Zhanxi, a professor at China's Fujian Agriculture and Forestry University, in the 1980s.

The hybrid grass is an important multi-functional agricultural resource. Its leaves, stems and roots can be used for ecological management, such as soil erosion control and desertification prevention.

Its cultivation technology has been brought to many parts of the world, including the South Pacific region, South America and Africa.

What impressed Lin most during his journey to help foreign countries develop Juncao technology was his first station in the Eastern Highlands Province of Papua.

Lin and his team arrived there over 20 years ago and solved a series of problems to localize and simplify Juncao technology, which proved to be a great success there.

"Local officials and over 5,000 people from across the country participated in a celebration rally. People sang and danced, shouting ‘China Juncao’ and ‘Juncao China’. In order to remember China’s help, a minister changed his daughter’s name to Juncao and published it in the newspaper,” said Lin.

China has helped about 12,000 technicians and 24 foreign students from developing countries grasp Juncao technology, and related documents have been translated into 18 languages and spread around the world.

This technology has lifted 17,500 households in Xihaigu, northwest China's Ningxia Hui Autonomous Region, out of poverty, and benefited 106 countries and regions in the world.

In 2017, China’s Juncao technology was listed as a key project of the China-UN Peace and Development Fund.