China at No. 2 in vehicle exports in Sept 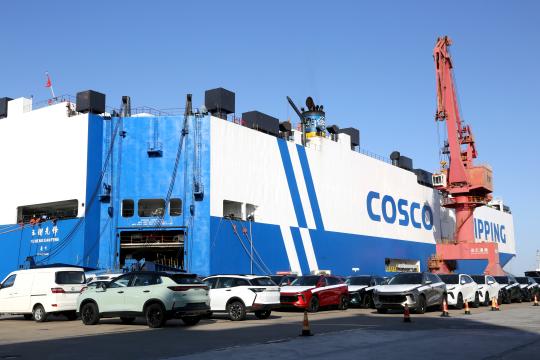 In all, 301,000 vehicles left China's ports in September, according to data from the China Association of Automobile Manufacturers released on Tuesday. September data showed a 2.6 percent dip from the record high in August, but vehicle exports were still up almost 74 percent year-on-year.

China overtook Germany as the world's second-largest vehicle exporter in August, and is now second only to Japan. Some 1.82 million units were shipped out of China in the first eight months of this year.

Exports from Germany in the same period stood at 1.66 million units, according to the German Association of the Automotive Industry.

Chinese carmakers are revving up their exploration of global markets. In September, Great Wall Motors, the country's largest SUV and pickup maker, sold over 18,000 vehicles overseas, accounting for one-fifth of its total sales in the month.

So far this year, it sold 112,000 units overseas, up 14 percent year-on-year. The carmaker said it is accelerating its go-global strategy, with electrification as one of its pillars.

One example is its plug-in hybrid H6 SUV, which hit the Thai market on Friday. The carmaker said it received over 1,000 orders for the model during a 40-minute launch event.

In the first three quarters, NEV exports totaled 389,000 units, double the figure in the same period last year. The top three destinations of such vehicles were Belgium, the United Kingdom and Thailand.

German car rental company Sixt signed a deal earlier this month for around 100,000 electric cars from China's BYD. The order is to be met by 2028.

In the first stage of the agreement, BYD will deliver several thousand EVs to Sixt, with the first of them likely to be made available in the fourth quarter of this year.

The model, which SAIC said was the result of its Chinese and British teams based on new car quality standards in different countries, will be available in around 20 nations on the continent in the fourth quarter.

The carmaker said the model will help it to grow Europe as its first overseas market where its annual sales can reach 100,000 units.

SAIC aims to sell at least 240,000 NEVs annually in Europe by 2025 as part of its goal to deliver 1.5 million vehicles to overseas markets in the same year. It sold 688,000 units outside of China in the first three quarters, up nearly 56 percent year-on-year.