China calls for deeper cooperation on internet of things 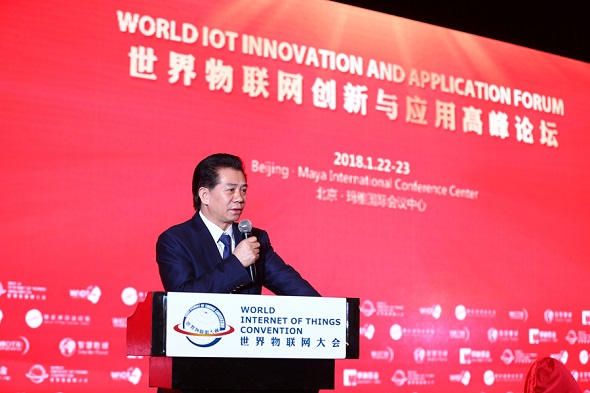 He Xuming, executive chairman of the World Internet of Things Convention, gives a speech at the World IoT Innovation and Application Forum held in Beijing on Jan 22, 2018. (Photo provided to chinadaily.com.cn)

China is calling for deeper cooperation on the internet of things among countries around the world, and to jointly launch a global demonstration platform for the IoT, said He Xuming, executive chairman of the World Internet of Things Convention.

“The formation of the World IoT platform will bring tens of millions of dollars to the global economic markets,” He said during the World IoT Innovation and Application Forum in Beijing on Monday.

”Today China is way ahead in terms of bike-sharing, drones, unmanned supermarkets, intelligent driving and other aspects of IoT applications. And we will work with other countries to set the game rules and further boost the development and application of IoT.

The forum is being held from Monday to Tuesday.

According to He, a world IoT standard organizing committee will be launched during the event. He advocated more international standard organizations and IoT companies to join the committee, which would better support the global development of the IoT industry.

Deemed as a multi-dimensional intelligent network system connecting things and things, and people and things, the emerging IoT is playing an increasingly significant role in driving the world’s economic growth. It is estimated that by 2025, billions of items and devices will be connected to the IoT globally and the market will exceed $30 trillion, He said at an IoT summit last year.

Li Bohu, an academician at the Chinese Academy of Engineering, said entering the new age of intelligent revolution, countries should embrace the key technologies, such as IoT, artificial intelligence and big data, in a more innovative and open way.

“IoT, AI and big data technologies will boost the development of smart manufacturing, which will help us gain new momentum in the global markets,” Li added.