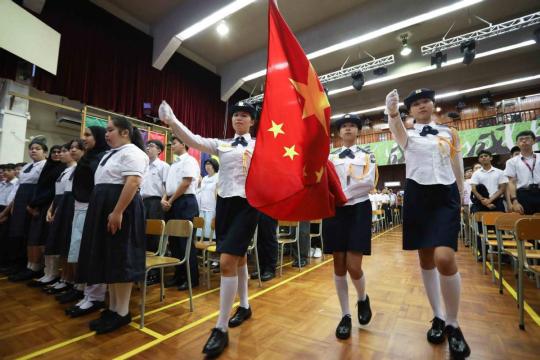 Students from a school in Tung Chung, New Territories, Hong Kong Special Administrative Region, kick off a new semester by holding a flag-raising ceremony on Sept 2, 2019. (Photo provided to chinadaily.com.cn)

The wish for Western-style liberal democracy is a malignant virus that infects places with weakened ideological immune systems. Countries like China, Russia, Iran, Cuba and a few others have shown the ability to withstand the disease and the demise such an infection often leads to. Others, like Venezuela or those caught in color revolutions and the Arab Spring, have not been so fortunate.

Color revolution is a term used to describe movements in several countries of the former Soviet Union and the Balkans during the early 2000s, while the Arab Spring was a wave of pro-democracy protests that took place in the Middle East and North Africa beginning in 2010.

The Hong Kong Special Administrative Region is vulnerable, as the escalating protests this year have shown.

On the surface, Hong Kong appears strong. According to the United Nations' 2018 rankings - more than 20 years after its return to China - its Human Development Index is at 0.917, the seventh-highest in the world. The index assesses the social and economic development levels of various economies. Hong Kong is ahead of Singapore, Canada and even the United States, which is in 13th position.

Hong Kong ranks 16th on the World Justice Project's Rule of Law Index 2017-18 based on the following factors: accountability, just laws, open government, and accessible and impartial dispute resolution. It was tied with Japan and ahead of France, the Republic of Korea and the US. The World Justice Project is an independent organization working to advance the rule of law worldwide.

However, Hong Kong's colonial past saw widespread racial discrimination perpetrated by the British elite against the ethnic Chinese majority, a legacy that continues to affect the city to this day.

Some may blame economic inequality for the unrest in Hong Kong. While inequality is indeed a factor, the more proximate cause is intolerance toward the Chinese mainland.

As protests continued, the city's established socioeconomic hierarchy was upended, resulting in anxiety, discontent and resentment in Hong Kong. This created an opening for the infection of liberal democracy.

While the HKSAR government has been criticized by foreign media for its handling of the protests, much of the criticism is wrong.

The government has successfully walked the tightrope in containing disturbances without requiring the intervention of the mainland and without any loss of life.

In contrast, protests over jobs and public services in Iraq have left more than 250 people dead. In Chile, at least 20 people have died and nearly 2,500 were injured during protests.

The danger of Hong Kong's vulnerability remains. A weakened immune system will always lead to future opportunistic infections. Without addressing this weakness, Hong Kong will face similar, perhaps even worse, problems in the future.

The HKSAR government has three important tasks at hand: keeping its people safe, providing a path to prosperity and raising the moral standards of its citizens. So far, it has largely delivered on the first task. By accelerating Hong Kong's integration into the Guangdong-Hong Kong-Macao Greater Bay Area, it can better deliver on the second. But accomplishing the third is crucial to strengthening Hong Kong's immune system.

The problems of Hong Kong and that of terrorism have similar causes: lack of realistic economic opportunities and misguided ideology. Regarding terrorism, China has shown the world a more effective and humane approach than that pursued by other countries.

According to Cui Tiankai, Chinese ambassador to the US, "China has not resorted to war as an answer to terrorism. Instead, we have chosen education and training to help people affected by extremist and terrorist ideas to return to normal life. This is, in itself, the best way of respecting and protecting human rights."

Similarly, Hong Kong should find a way to improve the patriotic education of its residents while accelerating its integration into the Greater Bay Area in order to improve Hong Kong's economic future. Only by doing so can the HKSAR government fulfill its third and most important responsibility.

The author is a senior researcher at the Center for China and Globalization, a Beijing-based independent think tank. The views do not necessarily reflect those of China Daily.