Investment abroad, export of capital will be the key to yuan outflows

On Aug 5, Chinese currency renminbi (RMB) breached the 7-yuan-per-1 dollar mark in both onshore and offshore forex markets for the first time since the 2015 exchange rate reform.

What exactly does this indicate?

As early as the beginning of this year, at the CEIBS Financial Management Salon, I made it clear that like in the stock market, where volatility is the norm, the RMB volatility is the norm in the foreign exchange market. "There is no need to panic over the RMB breaching the 7-yuan-per-dollar threshold," I said at the event.

According to the country's balance of payments, China has enjoyed many years' of trade surplus (that is, exports were larger than imports) and capital account surplus, which have helped it to build massive foreign exchange reserves.

This leads to a fundamental question: Is it a case of "more is better "when it comes to foreign exchange reserves? The answer is no.

Let's look at it from a monetary policy perspective.

The most important component of any monetary policy is money supply. In the graph alongside, the red line represents China's economic growth, and the blue one shows China's money supply. We can see that the blue line is significantly above the red one. This phenomenon is called an excess supply of money.

So, has the People's Bank of China put more money on the market than is needed? No. As a penny of collateral corresponds to the same amount of money, more collateral naturally means more money supplied. It just means that we have more collateral. Where does the collateral come from? Obviously, the bulk of it is in foreign exchange reserves.

In this sense, the yuan was not an independent currency, but a "sub-currency" affiliated to the dollar. Obviously, this was not helpful for the internationalization of the renminbi. To reform the money supply system, China had to eliminate its reliance on the yuan funds outstanding for foreign exchange. 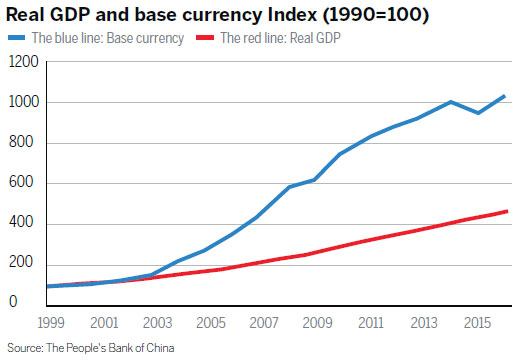 The RMB index stood at 100 at the end of 2014, and five years on, it is now around 95 or 96. We can see that although the yuan has slipped past 7 to the dollar, the RMB index has remained stable, with only a slight decline.

In the past, the yuan was pegged only to the dollar. That's why, people thought of the yuan/dollar exchange rate when they heard the renminbi exchange rate. In its exchange rate policy reform, the PBOC pegged the yuan to a basket of currencies.

The US trade deficit with trading partners is a major cause of outflows of dollars, while in the US Treasury market, the world's largest financial market with massive inflows and outflows of dollars, there are substantial foreign holdings of US government debt denominated in US dollars.

In addition, international trade in oil and commodities is also settled in dollars, serving as the final link in the global circulation cycle of the dollar.

But there is yet to be such a cycle for the yuan.

First of all, China is a trade surplus country. More goods are exported than imported, resulting in net inflows of the renminbi from overseas.

Second of all, China inbound investment has always exceeded outbound investment, meaning that inflows of the yuan are greater than outflows. So, in order to turn the renminbi into a global currency, China has to create a global circulation cycle, and the key lies in opening up new capital accounts.

Last year marks the 40th anniversary of China's reform and opening-up. Having successfully upgraded itself from a labor-intensive economy to a capital-intensive economy, China should start to export capital overseas according to the principle of comparative advantage.

China's capital intensity ratio was 1 percent in 2001, and as of 2016, it was 18 percent, marking an 18-fold growth. Now, with overcapacity, and excess inventory and capital, China should go global supported by capital accounts, facilitating outflows of the renminbi through overseas investment and export of capital. Meanwhile, China should bring back the renminbi by exporting industrial products. Then, a full circulation cycle of the yuan will be completed.

Businesses investing overseas may not be fully appreciative of the risks related to cross-border investment - including political, regulatory, market, foreign exchange, and legal compliance risks - but financial institutions as service providers for businesses must be fully prepared to mitigate such risks as they go global themselves.

Zhang Yimin is a professor of finance at the China Europe International Business School (CEIBS).