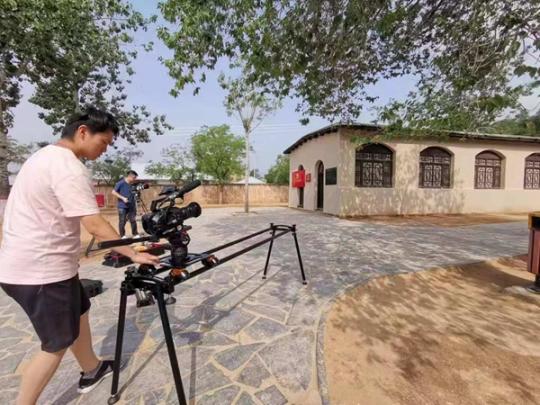 The production team of On the Great Roadhas traveled across the country to visit historic sites such as Xibaipo. (Photo/China Daily)

A documentary series that reviews touching stories and key events since the founding of the People's Republic of China in 1949 has prompted passionate discussion among viewers.

The 24-episode documentary, titled On the Great Road, made its debut on China Central Television on Sept. 16 to celebrate the National Day that falls on Oct 1. Major events are being planned to celebrate the country's upcoming 70th birthday.

It guides the viewers through a series of advances in a range of fields - such as land and economic reforms, transportation, science and diplomacy - that have enabled China to shake off its backward status and emerge as the world's second largest economy.

Ma Qian, a former government official who was appointed to help with poverty eradication efforts in a small village in Hubei province, said he was deeply touched after watching the segment that described how hundreds of college professors in Shanghai migrated to the northwestern city of Xi'an, Shaanxi province, in 1956 to boost the then impoverished region's development.

"Their spirit of selfless devotion moved me," he said. "As we are working toward reducing poverty nationwide, young people should take the responsibility of connecting with grassroots residents and making contributions."

Yue Peng, chairman of the Beijing State-owned Assets Management Co, said he was inspired by the experiences of overcoming obstacles. The documentary explores Chinese scientists' efforts in developing atomic and hydrogen bombs and man-made satellites during the 1960s and 1970s.

The company that Yue heads is now in charge of constructing the speedskating stadium for the Beijing 2022 Winter Olympic Games as well as refitting old stadiums for the events. "Despite the time constraints and the heavy workload, we will carry on the spirit of the older generations and make all-out efforts to help stage a wonderful event in 2022."

He Tianping, a television commentator and a doctoral candidate at the School of Journalism and Communication at Renmin University of China in Beijing, said the documentaries have struck a chord with audiences through vibrant storytelling and the use of footage of real historic events.

"It is also aired at an opportune time as the celebratory mood is building up," he added.

The documentary series is jointly produced by the Publicity Department of the Communist Party of China Central Committee, the National Development and Reform Commission, the China Media Group and several other government bodies and organizations.