It's time for fundamental rethinking on sorting of waste 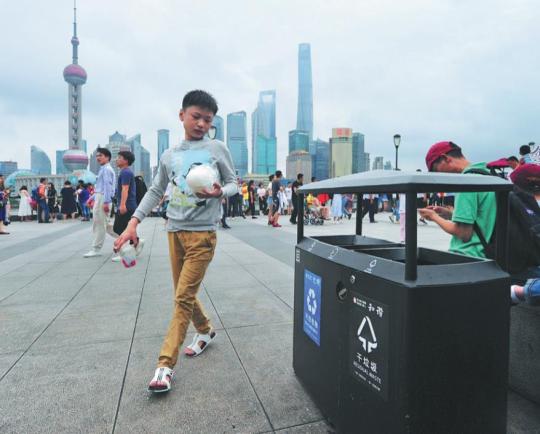 A young tourist walks toward a rubbish cabinet at the Bund in Shanghai. （Photo by Yang Yi/for China Daily）

An experience that is becoming increasingly common around the world is the sorting of waste.

It may seem like a trivial activity, but it has slowly moved into the center of conversation on the future of business and sustainable development.

Waste sorting is a complex phenomenon that can be an important step toward a global circular economy. Maybe it even will be something we will look back on as one of the first steps toward an ecological society.

But sorting of waste could also mean participating in an activity that undermines sustainable development by allowing unsustainable companies to use recycling as a way to pretend they are sustainable.

When Royal Dutch Shell, a British-Dutch oil and gas company, wanted to dump an oil rig in the ocean in 1995, many people in Europe had just started to separate glass bottles and newspapers. The company's plan was viewed as a sign of arrogance. The incident led to an important meeting, after which many companies started including environmental factors in their risk assessment.

The situation is different today. It is no longer clear if the kind of waste sorting done in Western nations is part of the problem or the solution. There are areas where the sorting of waste is working reasonably well, for example the glass and metal industries. But at a time when we are looking at a transformative system change and global sustainability, there is a need to fundamentally rethink waste sorting.

In the coming decades, the world needs to eliminate the use of fossil fuels, become more resource-efficient, lift billions out of poverty and ensure greater equity. In order to ensure this, we need a resource-efficient circular economy, and waste sorting can play a key role. But that would be a very different kind of waste sorting.

People around the world have begun to realize that much of the waste they sort is not integrated in sustainable material flows, but instead shipped to poor countries, where it is not handled in an appropriate manner. As more countries refuse to become dumping grounds for the unsustainable lifestyles of rich countries, a healthy discussion about global sustainability has begun to emerge.

Out of the waste that is recycled, much of it is turned into low-value goods in a way that does not result in a radically reduced use of natural resources. Instead, recycling initiatives are used by companies selling low-quality goods that are not made to last.

A waste sorting system for the 21st century should build on the opportunities that digitalization provides and allow citizens to track what is happening to the waste they are sorting and also provide information about the companies they have purchased products from.

It should also require companies to show how resource-efficient their solutions are, allowing consumers to compare options.

It is time to understand that Western recycling systems, to a large extent, are used by unsustainable companies that produce everything from fast fashion to unhealthy fast food.

China could initiate the next generation of waste sorting systems - those that support hyper-transparency and move away from the systems in the West that are contributing to reduced transparency. Such a waste sorting system would be a driver for innovation and extreme resource efficiency and a true step toward ecological civilization.

The author, who contributed this article exclusively to China Watch, is a senior adviser at the Research Institutes of Sweden, senior associate at the Chinese Academy of Social Sciences and fellow at the Research Center of Journalism and Social Development at Renmin University. The views do not necessarily reflect those of China Daily.