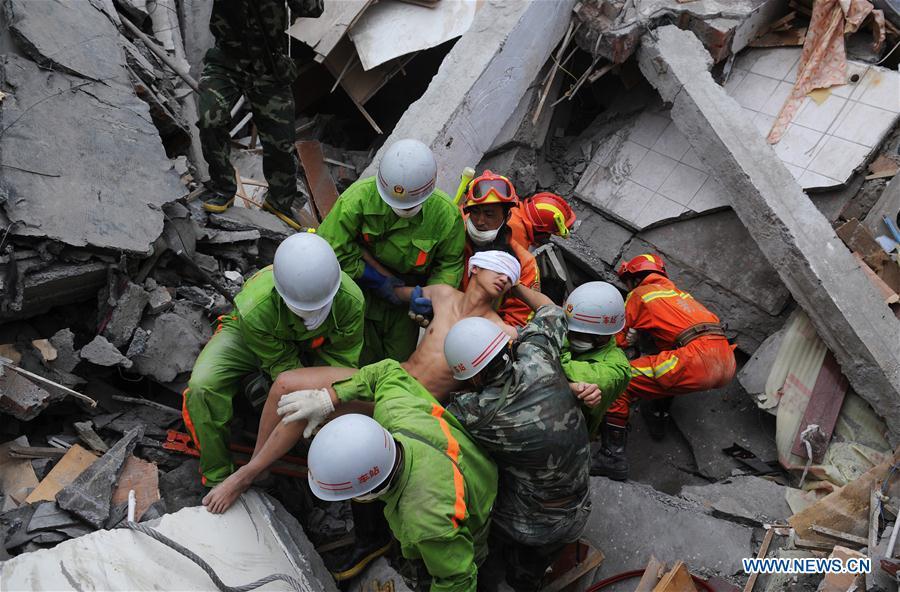 File photo taken on May 17, 2008 shows rescuers carrying Jiang Yuhang, who was trapped for about 123 hours in the rubble, at quake-hit Yingxiu Township of Wenchuan County, southwest China's Sichuan Province. The 20-year-old highway administration employee was extricated by firemen from Shanghai, after an 8.0-magnitude earthquake struck Wenchuan on May 12, 2008. Jiang was a survivor of the earthquake which left more than 69,000 dead, 374,000 injured, 18,000 missing and millions homeless. Jiang said it were firefighters who gave him the second life, and he desired to be a soldier like them. At the end of 2008, Jiang realized his dream to join the army and served in the group who once saved him. After training for half a year, he finally became a real fire soldier in Shanghai in 2009. Jiang later got promoted to the position of an officer, and in March this year, he was transferred to the firefighting force in his hometown Kaili City, southwest China's Guizhou Province. In the past ten years, the young man, who was saved in that catastrophic earthquake, saved more people's lives with his own efforts. (Xinhua/Jiang Hongjing)