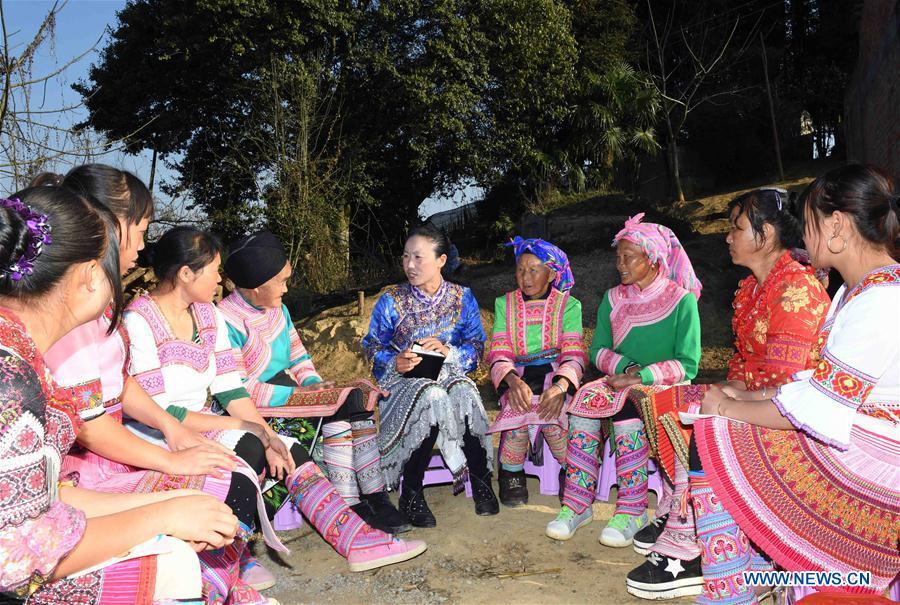 Doctor Yang Lianying of Miao ethnic group, a newly-elected deputy to the 13th National People's Congress, solicits opinions from villagers on green development and healthy life as she visits a village in southwest China's Yunnan Province, Feb. 24, 2018. Yang believes that green development should be focused on during poverty alleviation in remote mountainous areas. China's annual political sessions of the National People's Congress (NPC) and the National Committee of the Chinese People's Political Consultative Conference (CPPCC) are scheduled to convene in March, 2018. During the two sessions, development agendas will be reviewed and discussed, and key policies will be adopted. Year 2018 marks the first year of fully implementing the spirit of the 19th National Congress of the Communist Party of China, which vowed to pursue the vision of innovative, coordinated, green, and open development that is for everyone. The CPC congress stressed that building an ecological civilization is vital to sustain the Chinese nation's development, "we must realize that lucid waters and lush mountains are invaluable assets." (Xinhua/Yang Zongyou)