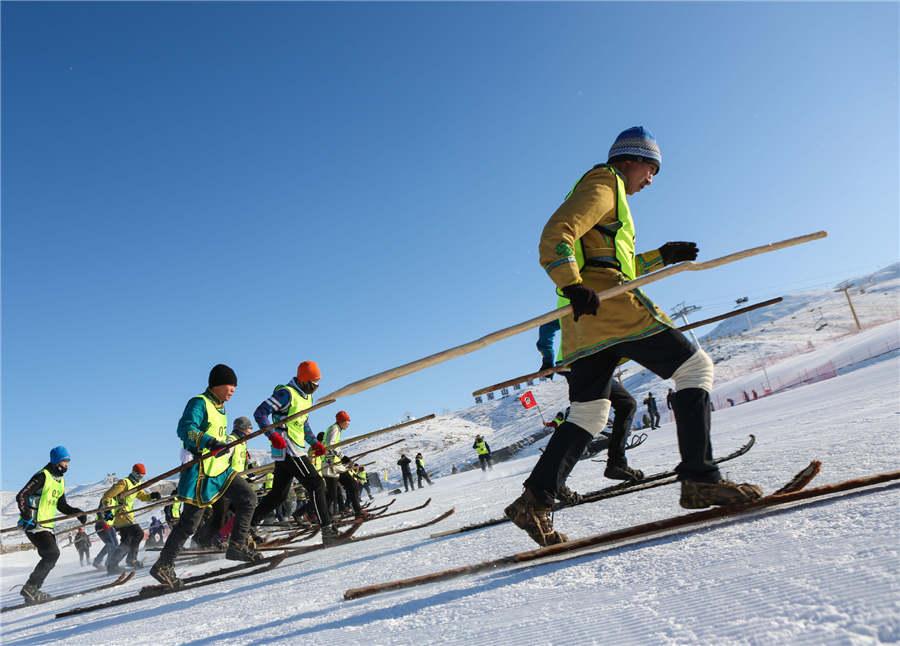 Winter tourism has injected vitality into Altay in Northwest China's Xinjiang Uygur autonomous region, which experiences temperatures of nearly minus 30 degrees Celsius in the coldest depths of the season. Ski resorts in Altay attract a large number of tourists.

Among the skiers sporting colorful goggles and ski suits, young men of Mongolian and Kazak ethnic groups catch the eye with their striking traditional clothes, wooden ski sticks and skis made of fur. This style of fur skis is believed to be among the oldest of their kind, according to rock paintings that show skiing scenes that were created about 12,000 years ago. Locals used to hunt with fur skis in winter hundreds of years ago, and now people still use fur skis to lead their herds to pasture in remote areas. In Hemu town of Altay, all the locals learn to travel across deep snow on skis.

Since then, regional ski competitions have gradually come into being. The local government has supported areas with fur skiing traditions, such as Hemu and Kanas, to establish traditional ski teams that attend more than 10 professional competitions annually. The competitions promote the tradition and have become a popular attraction in Altay, as part of a featured local winter tourism project. Tourists can also practice using and making fur skis by learning from those who have inherited the craft. They can also enjoy skiing performances during their trips.