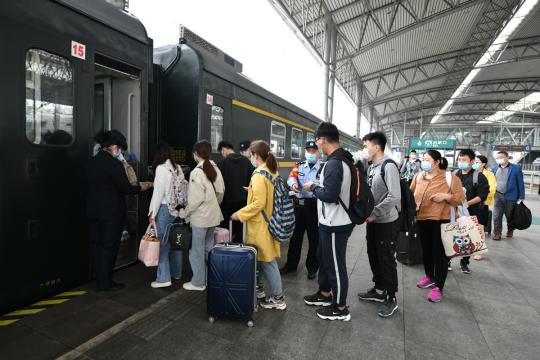 Passengers wait in line to board a train at Fuyang Railway Station in Fuyang, East China's Anhui province, on May 5, 2020. (Photo/Xinhua)

Railway passengers across China will wave goodbye to paper tickets as the country allows people traveling on normal-speed trains to use electronic tickets, according to the country's railway operator.

Starting on Saturday, the e-ticket system, which was previously limited to high-speed and intercity railways, will be promoted on rail lines running at normal speed, with over 1,300 such stations involved in the new arrangement, the China State Railway Group said on Wednesday.

Normal-speed trains play a vital role in railway transport and also serve as an important choice for passengers, handling over one-third of all railway passenger trips annually, the company said.

With the new policy taking effect soon, it will bring the total number of railway stations using e-tickets to more than 2,400, and about 95 percent of railway passengers across the country will benefit from the move, it added.

Passengers using the e-ticket system will be able to enter the station and check in with their ID cards and facial recognition without a paper ticket. The system will also reduce wait time and eliminate the risk of losing tickets or being sold fake tickets, it said, adding that the average time of ticket-checking will be shortened from 3.8 seconds per person to 1.3 seconds.

The e-ticket service first kicked off on the island-looping high-speed rail line of Hainan province in November 2018, and another four high-speed intercity railways were piloted in July 2019.

After being promoted to most of the high-speed lines across the country during the fourth quarter last year, it realized full coverage on all high-speed and intercity railways in late April.

Since undergoing tests amid robust traffic during the Spring Festival, summer vacation and other holidays, the e-ticket system has been operating safely and steadily on high-speed railway networks while garnering positive passenger feedback, which laid a solid foundation for promoting it on the normal-speed lines, it said.

Zhao Jian, a professor of rail transportation economics at Beijing Jiaotong University, said having a paperless system for both high-speed and normal-speed railways will streamline boarding procedures, increase travel efficiency for passengers and lead to better services.

"It seems to save only a few seconds for a single passenger. But with the incredible number of people taking high-speed trains, it will greatly ease the rail system," he added.

By the end of last month, passengers had bought a total of 872 million electronic tickets, according to the company.