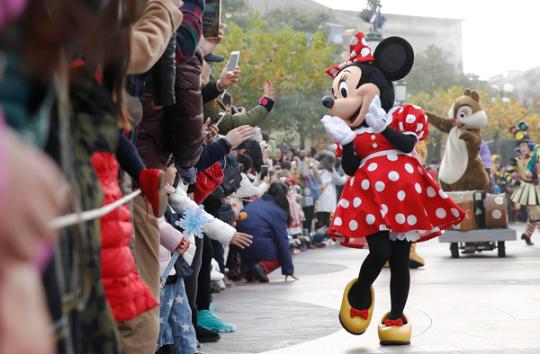 Shanghai Disney Resort is seeking to enable its patrons to soar to infinity and beyond this summer.

Woody, Slinky Dog, Buzz Lightyear, Bo Peep and a suite of related enhancements, characters and merchandise are poised to bring a cool celebration to the park.

Toy Story Landdid not even materialize when the Shanghai park debuted in June 2016. But thanks to the fastest expansion recorded across the Disney assets worldwide, consumers in China began to enjoy such immersive experience just one year after the park's opening.

And more attractions are in the pipeline.

Theme parks are core to the business model of media and entertainment giant Walt Disney Co. Simply by numbers, the Shanghai resort has done justice to its status of being the largest and latest: it clocked up 11 million visitors and achieved break-even in its very first year of operations, a remarkable achievement across Disney's recently-built facilities worldwide.

It has been rated among the top 10 most-visited theme parks worldwide by the Themed Entertainment Association for two years consecutively.

But the real differentiator is the unique storytelling experience that is woven into the variety of thrilling rides, gleaming complex of shops and restaurants as well as interactive shows and attractions, said Joe Schott, president and general manager of Shanghai Disney Resort.

"We try to extend our stories for the guests from film to real life," he said. "What we really focus on is ...trying to be authentically Disney as we go through that process, but distinctly Chinese at the same time," said the 37-year veteran of Walt Disney.

Compared with many amusement parks, a winning recipe for Disney has always been changing, for example, a roller-coaster from a mere track winding through air to integrating the ride with stories that had become famous in its blockbuster movies.

Schott cited the example of how they even introduced new Disney characters to Chinese guests and make Duffy and friends some of the most beloved characters in the park, by creating tangible experiences in entertainment and themed merchandise and food and beverages.

The 'authentically Disney, distinctively Chinese' motto is put into the park's daily operations. Schott said his team, a lion's share of whom are Chinese, has been striving to strike a balance while introducing traditional Western carnivals like the Halloween and upholding traditional etiquette like Spring Festival.

For instance, the park and the resort are decked out in festive decor to create an enchanting atmosphere, complete with vibrant Mickey lanterns, Chinese couplets, floral garlands, shades of red and gold, and auspicious melodies.

"Thinking about menu, merchandise, entertainment and the decor of the park - it's all the same group of people that are thinking about that and that's part of my team here locally. There are some of the same seasons that we run in parks around the world but their styles are completely different," he said.

Local adaptation also manifests in how the global entertainment titan jumped on the digital express bandwagon spearheaded by Chinese people.

Schott said the Shanghai facility is the first Disneyland to launch a mobile app at opening that can show the real waiting time for each ride and incorporate functions to help plan people's visits.

For example, when Avengers: Endgamewas playing at the cinemas, one restaurant in the park adopted a Marvel-themed decor and added new dishes to its menu, including an Avengerswagyu beef burger with bun, and a Captain Americasoda float.

"Those are things that I'm confident you probably took a picture of it and posted it on social media," he said. "At the end of the day, your connections with those stories are showing that what you're a fan of and we have so many different stories to embrace."

The Disney strategy and strength have always been building an all-out blitz of new attractions, construction and new content that work together to create synergy between theme parks and entertainment, said He Jianmin, a professor of tourism management at the Shanghai University of Finance and Economics.

This is best exemplified by the decision to build the world's first theme land based on Zootopia, the highest-grossing imported animation film in China, which is bound to "attract both new and recurring guests alike", he said.

Schott said a "five-year plan" is just not long enough for the park to really thrive and get deep rooted in the Chinese market.

"We have a long-term plan for Shanghai Disneyland and the question is really about the way we deliver the experiences on a daily basis and build these into longer-term objectives," he said.