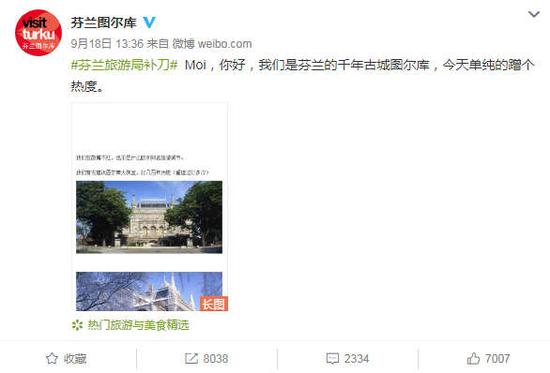 The post of the tourism bureau of Turku on Sina Weibo

The tourism bureau of Turku in Finland has become a hit on Sina Weibo, the Chinese version of Twitter, after releasing a post saying Turku is just 50 minutes from Stockholm, Sweden.

In the early hours of Sept. 2, three Chinese tourists, including two elderly people, were treated brutally by local police on the outskirts of Stockholm.

The incident sparked a heated debate about the safety and legitimate rights of Chinese tourists abroad.

Alongside pictures of landmark sites, culture and local customs in Turku, the bureau posted how to contact Finnish police and the Chinese Embassy in Finland for those in need of emergency assistance.

Nearly 2,300 Weibo users left comments on the post. Some users said it was very naughty of the Turku tourism bureau to release a post of this nature at this time, while others said the post had sparked their curiosity in travelling to Turku.